A revealing story about how Kevin Pierre-Louis has learned to manage his depression.

The upcoming game vs. Atlanta is surprisingly one of the best on Seattle’s remaining schedule.

Four stats that tell the Seahawks’ story so far.

What the media had to say about Seattle’s first quarter.

Germain Ifedi is “a real presence” on the offensive line.

Jimmy Graham’s return from a torn patellar tendon has been impressive.

Cassius Marsh was among those fined for a penalty in the Jets game.

The Seahawks are focusing this week on figuring out how to finish games, but a fair number might not even get in the game Sunday when they play the Carolina Panthers.

Of the 10 players on the Seahawks’ injury report Thursday, nine were defensive players – and their front seven suddenly has joined their secondary in making the entire defense a M*A*S*H unit.

That could create problems against Carolina, which comes in with the No. 4 rushing offense in the NFL (132.3 yards per game) and has the best toxic differential (turnover margin and big-play margin) in the league.

END_OF_DOCUMENT_TOKEN_TO_BE_REPLACED

John Schneider has been hailed for his ability to find mid-round diamonds in the rough, but his track record in the fourth round certainly hasn’t been responsible for that reputation.

The trade of Kevin Norwood is the latest example. And, if rookie Terry Poole is let go this week as well, Schneider’s Round 4 record will take yet another hit.

Obviously, the fourth round is a bit of a crap shoot, but teams should hit on at least half of those picks. Since Schneider took over the Seahawks in 2010, the league average on successful fourth-rounders has been between 55 and 60 percent (not counting this year, of course).

But the fourth round has been Schneider’s worst — based on typical expectations. In his six drafts, Schneider has selected a league-high 12 players in the fourth. Of the 10 drafted before this year, just four remain — and only two have really done much to help the Hawks. 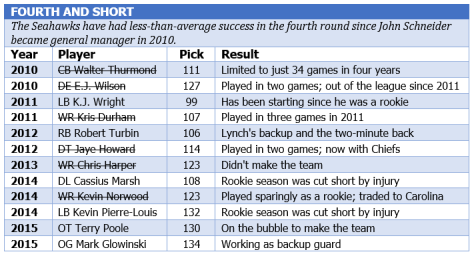 END_OF_DOCUMENT_TOKEN_TO_BE_REPLACED

The Seahawks entered their second preseason game with a lot of questions on the offensive line and secondary and came out with some mixed answers in a 14-13 loss to the Chiefs in Kansas City.

They also showed what Jimmy Graham will do for them, saw more from Tyler Lockett and got another great game from their No. 1 front seven on defense.

With Justin Britt moving from right tackle to left guard and Garry Gilliam stepping in at right tackle, the offensive line performed much better than it had in the opener vs. Denver, which got seven sacks.

Wilson was not sacked as he completed 9 of 15 passes for 78 yards. But the first offense really struggled again to run the ball and could not get into the end zone. Robert Turbin ran for a mere four yards on six carries, and Christine Michael ran for 27 on 10 attempts (and also busted a running play by going the wrong way). It wasn’t any better than the first game, when the Seahawks totaled just 89 yards on 24 attempts.

Pete Carroll said he liked the pass protection but added, “We’re not running the ball as well as we would like at this time. … That might change once No. 24 (Marshawn Lynch) gets in there.”

He said the offensive line “did not get the movement we need.” He also confirmed that free-agent guard Evan Mathis is coming to Seattle for a physical Saturday.

END_OF_DOCUMENT_TOKEN_TO_BE_REPLACED

The Seahawks open the preseason against the Denver Broncos tonight in Seattle. Here is our breakdown of the defense, what we will be watching in the first game and our updated roster projections:

Pete Carroll says this defensive front is the fastest he has had in Seattle — clearly a nod to the addition of Clark. The coach was stoked about the unit after the scrimmage last weekend, and he is clearly excited about a pass rush that features Bennett, Avril, Clark, Hill and Bruce Irvin.

The one bummer was the release of Tony McDaniel, who turned out to be the cap casualty over Mebane after the big contracts given to Russell Wilson and Bobby Wagner.

Bennett still is unhappy with his contract, and he even told McDaniel he would love to be back in Tampa Bay (he probably saw the Bucs’ salary cap space: $13.7 million).

But Bennett has been mentoring Clark, who is going to be Bennett Jr. this season — an inside-out player.

“I lean on him a lot; he looks out for me a lot,” Clark said of Bennett. “He’s a guy that’s been in the league for a numerous amount of years. He has experience. He’s a great player, as well as Cliff Avril, Big Mebane; they teach me a lot of things, just the proper techniques of how to play NFL football.”

END_OF_DOCUMENT_TOKEN_TO_BE_REPLACED

The Legion of Boom’s three key members played in the Super Bowl despite being about 50 percent healthy.

To illustrate just how little the first preseason game means in comparison, none of them will be on hand Friday.

Safeties Earl Thomas (shoulder) and Kam Chancellor (holdout) have not been available to practice all camp so far, and now Richard Sherman has a hip problem that will keep him out against the Denver Broncos.

“Sherman’s got a little bit of irritation in the hip flexor area,” Pete Carroll said Thursday, “so we’re going to tend to that and take care of that and make sure he’s right for the long haul.”

Top nickel corner Will Blackmon also is not expected to play.

“Will’s got a groin thing that is bothering him a little bit,” Carroll said. “Real slight, but again those are the kinds of decisions we’ll probably make in favor of holding him out.”

With Tharold Simon and Jeremy Lane both recovering from surgeries, that means Marcus Burley, rookie Tye Smith, trade acquisition Mohammed Seisay and receiver convert Doug McNeil all will see time opposite and in place of new right corner Cary Williams.

Call it the Legion of Baby Boomers.

END_OF_DOCUMENT_TOKEN_TO_BE_REPLACED

Some observations from Day 9 of camp from those who were there (and other features):

Dion Bailey is working as the No. 1 strong safety now because “you can’t deny the production.”

Drew Nowak is challenging for the starting center spot, and now Keavon Milton is in the hunt at left guard — at least the Hawks would have Alvin Bailey think so.

Bruce Irvin, out to prove something in a contract year, is having his best camp.

Pete Carroll said Kevin Pierre-Louis stood out most after watching film of the scrimmage Saturday.

So much for Tony McDaniel possibly returning. He reportedly has a deal with Tampa Bay.

Field Gulls rounded up a bunch of radio interviews from the past few days.

Some observations from Day 5 of camp from those who were there (and other features):

As Kam Chancellor’s holdout dragged on, Earl Thomas was removed from PUP. Rob Rang suggests that killed some of Chancellor’s leverage.

Stephen Cohen of the Seattle P-I said rookies Kristjan Sokoli and Mark Glowinski worked at left guard, and he talked to Eric Pinkins about his move to linebacker.

When Cassius Marsh was drafted last year, we figured he was going to be a LEO, but the Hawks instead tried him all over the place. Now, per The Seattle Times, he is focusing purely on LEO.

Keith Myers of 12th Man Rising said B.J. Daniels — deep down the WR chart — made his first standout plays and Marsh continued to have a strong camp.

END_OF_DOCUMENT_TOKEN_TO_BE_REPLACED

While not working out with teammates in Seattle, Bruce Irvin apparently still would like to play in Seattle past this year.

John Clayton thinks Russell Wilson will sign a four-year deal worth up to $87 million, with up to $49 million guaranteed, by the time training camp starts in late July.

Contract analyst Joel Corry thinks the Hawks could get away with a $25 million signing bonus for Wilson. Seems light, considering they need to pay him at least $31 million this year. (Just mute the video of that goober Doug Gottlieb.)

Tom Cable and Rocky Seto got very detailed at the Seahawks Town Hall on Wednesday, discussing O-line technique and the Hawk tackle.

Kam Chancellor talked about the effect his knee injury had on him in the Super Bowl and how happy he is he didn’t have to undergo any kind of surgery this offseason.

Jimmy Graham talked to Clayton about his excitement to be playing with Wilson and the Hawks. In a little revisionist history, the high-scoring tight end joked the red zone was named after him due to his red hair.