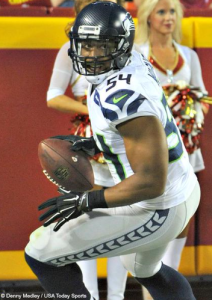 The Seahawks entered their second preseason game with a lot of questions on the offensive line and secondary and came out with some mixed answers in a 14-13 loss to the Chiefs in Kansas City.

They also showed what Jimmy Graham will do for them, saw more from Tyler Lockett and got another great game from their No. 1 front seven on defense.

With Justin Britt moving from right tackle to left guard and Garry Gilliam stepping in at right tackle, the offensive line performed much better than it had in the opener vs. Denver, which got seven sacks.

Wilson was not sacked as he completed 9 of 15 passes for 78 yards. But the first offense really struggled again to run the ball and could not get into the end zone. Robert Turbin ran for a mere four yards on six carries, and Christine Michael ran for 27 on 10 attempts (and also busted a running play by going the wrong way). It wasn’t any better than the first game, when the Seahawks totaled just 89 yards on 24 attempts.

Pete Carroll said he liked the pass protection but added, “We’re not running the ball as well as we would like at this time. … That might change once No. 24 (Marshawn Lynch) gets in there.”

He said the offensive line “did not get the movement we need.” He also confirmed that free-agent guard Evan Mathis is coming to Seattle for a physical Saturday.

At least the passing game looked pretty good though — after the first two drives. The Hawks featured a short passing game, and Wilson finally started moving the group on the third series, when he hit rookie Lockett for nine yards and Doug Baldwin on a 20-yard catch-and-run.

Wilson got it going with Graham on the fourth drive, finding him three times for 39 yards as the Hawks finally got into Kansas City territory. He hit him on a rollout drag route for six yards, hit him for a 12-yard gain and then tossed up a back-shoulder pass on a seam route for 21.

The Hawks ended up bogging down after two runs by Michael gained just three yards and Wilson threw behind Doug Baldwin on third down. But the drive really showed what Graham brings to the offense. “You can tell he’s going to fit right in,” Carroll said.

“We did a great job,” Wilson said. “We didn’t capitalize there at the end. That was my fault.”

It wasn’t a great performance by the offense, but it certainly looked better than it had in the opener. Baby steps.

Meanwhile, the defense came into the game without 11 defensive backs, including seven of the 11 cornerbacks. But the front seven took the pressure off, and Swiss Army knife DeShawn Shead stepped in at corner and played very well.

The linebackers led the way, with Bobby Wagner jumping a pass route and returning an interception 25 yards for a touchdown in the second quarter and K.J. Wright and Kevin Pierre-Louis running all over the field to lead the team with six tackles apiece (total of three for loss).

The only real flaw by the linebackers was a scheme win by the Chiefs, who got wide receiver Jeremy Maclin matched up against Bruce Irvin for a 3-yard touchdown catch in the second quarter.

The Hawks’ nickel rush gave a preview of how great it could be, with Cliff Avril, Michael Bennett, Frank Clark and Irvin. Clark was not even expected to play due to a sore ankle, but he tipped a pass on third down with that quartet pressuring Chiefs quarterback Alex Smith.

The Hawks have been working to getheir fastest D-linemen on the field together, and Carroll said, “We’ll continue to experiment with that.”

Bennett and Brandon Mebane also came up with sacks.

With seven cornerbacks out — most of them short term — Shead moved over from safety and looked great opposite Cary Williams. He was tested early and forced a couple of incompletions. Williams had some communication issues with young safeties Dion Bailey and Steven Terrell in zone coverage. Carroll again praised rookie corner Tye Smith, who was strong while playing pretty much the entire game.

As for the injured corners, Carroll said he expects Richard Sherman, Will Blackmon, Marcus Burley and Tharold Simon all to play in the third preseason game, next Saturday against the San Diego Chargers. 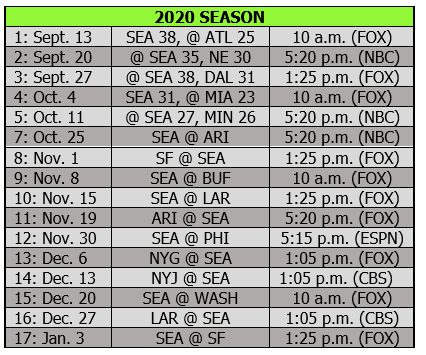