Pete Carroll debunked today’s rumor that he might return to USC: “That’s not happening. We’re in good shape here.”

Carroll talked about the defensive breakdown vs. Carolina and losing again despite winning the turnover battle.

Carroll also said, “We should be 6-0 and we should be rolling right now.’’

The coaches are the culprits in these collapses.

The Seahawks have gotten good pressure on quarterbacks the past two games.

Meanwhile, they are the worst red-zone offense in the NFL.

The Seahawks will reinstate Derrick Coleman, although it might not be this week.

49ers coach Jim Tomsula is satisfied with the condition of Levi’s Stadium turf.

“This league drives you to 8-8.” — Seahawks general manager John Schneider.

John Schneider has said it more than once: The NFL is built for parity and staying on top is a tough task.

But, the Seahawks are a team that has been made for rallies, and Pete Carroll and the players are optimistic they will figure out how to close out opponents and get it going. Plus, the NFC West is still very much within reach.

END_OF_DOCUMENT_TOKEN_TO_BE_REPLACED

Sounds like a Seahawks fan tried to give the Panthers a taste of what it feels like to be playing in the early morning. Not cool.

The Panthers always come along at a critical point for the Seahawks.

Even former Seahawk Kevin Norwood — now a Panther — thinks this game is pivotal.

Dave Boling thinks the Seahawks will use Carolina as a springboard again.

Tight ends are still a problem for Seattle — and Greg Olsen is coming to town.

END_OF_DOCUMENT_TOKEN_TO_BE_REPLACED

Almost a year ago, the Seahawks were in the exact position they are in now — struggling to find themselves as they prepared to face the Carolina Panthers.

The Seahawks have many of the same problems they had last year at this time: Their defense has had trouble against tight ends as Greg Olsen comes to town; their interception total is uncommonly low; Bobby Wagner is hurt; Marshawn Lynch is a story; the offense is in transition; and Derrick Coleman won’t play again.

END_OF_DOCUMENT_TOKEN_TO_BE_REPLACED 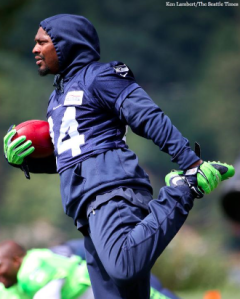 Marshawn Lynch is back. But does anyone care?

Lynch was listed as questionable before practice Friday, but coach Pete Carroll said after practice, “He looked really back to full health. … He made it out, looked good, and we’re counting on him playing (Sunday vs. the Carolina Panthers).”

It wasn’t even close to the most compelling storyline for media this week, though. On Wednesday, 11 questions were asked before the topic of Lynch came up. On Friday, Lynch was the 14th question — partly obscured by news that fullback Derrick Coleman had been suspended after his arrest for hit-and-run.

One of the dumb questions asked by a reporter Wednesday: Does Lynch take his old job back? To which Carroll scoffed, “Heck yeah. I think he’s earned that.”

Of course he has. The Seahawks aren’t paying him $12 million this year to have him sit on the bench, especially after he has run for at least 1,200 yards in each of the last four seasons, scoring 56 touchdowns.

But people now seem more interested in whether rookie upstart Thomas Rawls will continue to get playing time.

END_OF_DOCUMENT_TOKEN_TO_BE_REPLACED

The Seahawks are focusing this week on figuring out how to finish games, but a fair number might not even get in the game Sunday when they play the Carolina Panthers.

Of the 10 players on the Seahawks’ injury report Thursday, nine were defensive players – and their front seven suddenly has joined their secondary in making the entire defense a M*A*S*H unit.

That could create problems against Carolina, which comes in with the No. 4 rushing offense in the NFL (132.3 yards per game) and has the best toxic differential (turnover margin and big-play margin) in the league.

END_OF_DOCUMENT_TOKEN_TO_BE_REPLACED

The Seahawks waived B.J. Daniels and Rod Smith and were expected to add cornerback Crezdon Butler. Their other addition could end up being a defensive lineman, with Jordan Hill and Demarcus Dobbs down. Also, recall that Paul Richardson can start practicing next week.

What has happened to Russell Wilson’s game-winning magic?

Brock Huard explains how the Hawks need to use Jimmy Graham: Forget the short crap and send him deeper into the middle of the field. We agree.

Some people apparently want to get rid of Graham. No, they just need to use him better.

The Seahawks’ turnover stats are upside-down, but Pete Carroll expects them to turn right side up soon.