Jon Ryan is off the injury report, meaning he figures to play vs. Arizona.

Michael Bennett and Seattle’s pass rush could have a good day vs. Arizona.

The Seahawks are aiming for the fourth perfect home season in their history.

What has happened to the Cardinals this season?

Bennett was fined for his “three pumps” dance.

What’s up with Sherman? Plus other Week 16 questions.

END_OF_DOCUMENT_TOKEN_TO_BE_REPLACED

The Seahawks are NFC West champs, but are they good enough to be any more than that?

It was a night of redemption for Russell Wilson.

Michael Bennett felt fine after wrenching his neck on a hellish hit.

Jon Ryan was taken to the hospital after suffering a concussion during a crazy run off a fake punt.

Bennett and the defensive line had a feeding frenzy against rookie QB Jared Goff.

END_OF_DOCUMENT_TOKEN_TO_BE_REPLACED

The Seahawks are big underdogs in New England, where they will see how they stack up against their Super Bowl XLIX opponent.

Here’s a preview of Seahawks-Patriots.

Seahawks.com offers an in-depth look at why the Seahawks and Patriots are two of the NFL’s elite teams every year.

The Seahawks will see Malcolm Butler again, among other matchups.

Some more keys to the game.

C.J. Prosise could start for a hobbled Christine Michael.

Michael Bennett will not play, which is good news to Tom Brady, who considers Bennett to be the best defender in the NFL.

Jeremy Lane is ready for a healthy rematch vs. the Patriots.

END_OF_DOCUMENT_TOKEN_TO_BE_REPLACED

Over the weekend, DeShawn Shead became the fourth Seahawk to get married this year. Earl Thomas had a blowout ceremony in April, and Russell Wilson and Jon Ryan married their equally famous women earlier this month.

That’s four rings for the Hawks this year. We’d like to propose they add another next February.

Michael Bennett was back for mandatory minicamp and explained why he won’t hold out.

Kam Chancellor is healthy, wealthy (enough) and (finally) wise — not planning a holdout.

Among the notables on Day 2 of the minicamp, per Bob Condotta, were C.J. Prosise, Christine Michael and Douglas McNeil.

END_OF_DOCUMENT_TOKEN_TO_BE_REPLACED 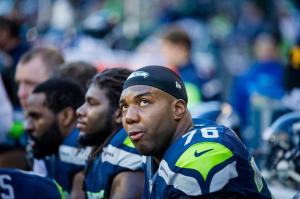 And then there was one.

With the re-signing of Jon Ryan on Friday, the Seahawks are 4-3 with their eight key UFAs — Russell Okung being the last free agent standing.

If you thought the last few days were full of drama, get a load of this LT puzzle.

As Okung leaves the Giants to visit the Lions (and maybe the 49ers after that), the Seahawks reportedly are planning to meet with Pittsburgh tackle Kelvin Beachum on Monday and reportedly have some interest in Oakland tackles Donald Penn and J’Marcus Webb, along with Arizona’s Bradley Sowell.

END_OF_DOCUMENT_TOKEN_TO_BE_REPLACED 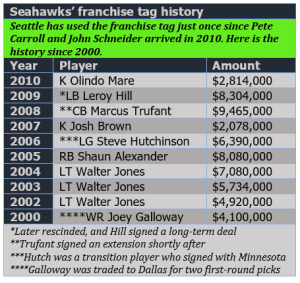 The franchise tag period runs today through March 1, and the Seahawks will skip it for the sixth straight year.

They have not used the tag since 2010 — the first year of the Pete Carroll/John Schneider regime — when they used it on Olindo Mare.

Schneider has stayed ahead of the curve, avoiding any need for the tag by getting early extensions done with potential franchise players Marshawn Lynch (2012), Kam Chancellor (2013), Earl Thomas and Richard Sherman (2014) and Russell Wilson and Bobby Wagner (2015).

They gambled on Michael Bennett in 2014 and ended up re-signing him a day before free agency started — a week after the tag deadline.

END_OF_DOCUMENT_TOKEN_TO_BE_REPLACED 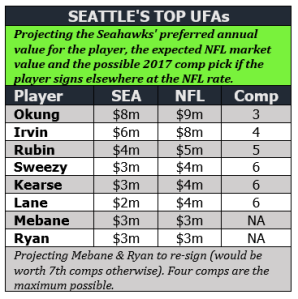 Thanks to going minus-five in free agency last year, the Seahawks are going to get three compensatory draft picks this year — including a rare third-rounder.

You can bet John Schneider would be fine with getting another third next year — and he has two free agents who might be able to net him that.

The Seahawks have eight key unrestricted free agents — four defensive starters, three offensive starters and punter Jon Ryan — and are not going to be able to keep all of them. In fact, Seattle could end up losing six UFA starters.

But Schneider would be fine with that — because it would mean another nice haul of comp picks (up to the maximum four) in 2017.

END_OF_DOCUMENT_TOKEN_TO_BE_REPLACED

Russell Wilson and presumed MVP Cam Newton (he has Wilson’s nonexistent vote) have been en fuego.

The teams have more in common than just dynamic quarterbacks.

Kam Chancellor had perhaps the best game of his career vs. Carolina in last season’s divisional playoff game. Can he repeat it?

Pete Carroll said he doesn’t care if tight ends catch balls against his defense — someone is going to — but Greg Olsen beat them in Week 6 and will be a big factor again.

The Panthers are thin at cornerback, which could play into the hands of Wilson and Doug Baldwin.

Here’s a comprehensive preview of the game.

END_OF_DOCUMENT_TOKEN_TO_BE_REPLACED 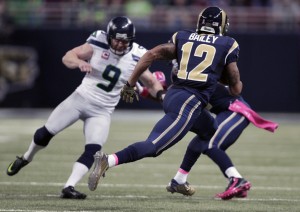 They have had a little trouble against one team in one venue — and, of course, it happens to be the place where they start the season Sunday: St. Louis.

The Hawks have been beaten by Jeff Fisher’s and John Fassel’s special teams twice in the past three years, and you know Schneider and Pete Carroll are sick of it.

It’s probably no coincidence that the Seahawks added a special teams standout the week before they open the season in St. Louis. Ostensibly, Kelcie McCray is safety depth. But, it just so happens that he is one of the top special-teams guys in the NFL — which is why the Hawks had to send the Chiefs a fifth-round pick.

According to Pro Football Focus, McCray was the NFL’s best “vice” in 2014. (That’s the guy on the punt return team who hinders the gunner on the punting team.)

McCray joins a fully loaded special teams crew that Carroll strongly thinks has “a chance to be very, very good.”

The Hawks lost two of their top teams guys, Malcolm Smith and Jeron Johnson, to free agency, but second-year players Kevin Pierre-Louis and Cassius Marsh were all over the place in the preseason and clearly are prepared to step in alongside mainstays Mike Morgan, DeShawn Shead, Brock Coyle, Derrick Coleman, Ricardo Lockette and Luke Willson.

“As the younger guys … elevated, you saw their impact. That’s KPL; that’s Cassius,” Carroll told 710 ESPN. “They had fantastic preseasons in adding to a core group that’s already pretty good.

“I don’t know if we’ll see it all in Game 1 or 2, or when it’s going to show, but over the long haul this is a really good special teams group.”

It’s appropriate that the Hawks open in St. Louis and Green Bay — special teams played key roles in two of their four games against the Rams and Packers last season.

Seattle’s teams were huge in the comeback win against the Green Bay Packers in the NFC title game. Punter Jon Ryan threw a touchdown pass to Garry Gilliam on a fake field goal, and Steven Hauschka and Chris Matthews teamed up on a pivotal onside kick with 2:07 left and Seattle trailing 19-14.

Of course, Seattle’s kicking teams lost the game in St. Louis. Russell Wilson became the first player in NFL history to throw for 300 yards and run for 100, but Seattle surrendered a 75-yard kickoff that set up one touchdown, got fooled on a punt return that went 90 yards for a TD and got burned on a fake punt late in the game that helped seal the Rams’ 28-26 win.

It was the second time the Hawks had been burned by Jeff Fisher and his special-teams coach, John Fassel, in St. Louis in three years. In a 19-13 win in 2012, Greg Zuerlein hit four field goals — including from 58 and 60 yards — and the Rams fooled the Hawks on a fake field goal as punter Johnny Hekker threw a 2-yard TD pass to Danny Amendola.

The Hawks quite obviously are aware of their failures in St. Louis, and they did all they could this year to make their kicking units even better than they have been.

The big addition, of course, was Tyler Lockett, who quickly proved this preseason that the Hawks’ return game is back in gear — like it was when Leon Washington was the main man from 2010 to 2012.

“With the addition of the return threat, we’re loaded,” Carroll said, “and we can win games on special teams.”

St. Louis would be a good place to start.