There never seems to be as much fretting about other franchise quarterbacks re-signing with their teams as there is about Russell Wilson staying in Seattle. For some reason, national media and plenty of fans always seem to think the Seahawks are going to have a tough time keeping Wilson.

Whether it’s some radio joker speculating that Wilson will try to force his way to New York or people thinking the QB will pull a Kirk Cousins and play on the franchise tag until he can leave, everyone has a paranoid theory about why Wilson is a short-timer in Seattle.

The latest speculation is that Wilson might prefer to wait on the new CBA and see how much the NFL’s new gambling and TV deals add to the coffers, so he doesn’t sign a deal that quickly becomes undervalued.

Instead of playing the franchise game, though, he should move straight to Kirk Cousins Strategy Part II and push the Seahawks to give him $100 million fully guaranteed over three years.

END_OF_DOCUMENT_TOKEN_TO_BE_REPLACED

Here are the key statements from John Schneider at the Combine today:

The GM expects Frank Clark to be a Seahawk but does not yet know whether he will end up using the franchise tag on him by Tuesday. (Or, if he does, he is not saying.)

Schneider has talked to Russell Wilson‘s agent, Mark Rodgers, about an extension, but that is not a priority at this stage of the offseason. Schneider also said he gets the impression Wilson wants to remain with the Seahawks. “I have no reason to believe otherwise — other than Internet rumors.”

END_OF_DOCUMENT_TOKEN_TO_BE_REPLACED

As the Combine begins, we’re just a few days from finding out where the Seahawks and Frank Clark stand.

At the Combine on Wednesday morning, Schneider said, “Communication has been great. There’s a strong level of trust between the two of us.” Asked whether he would franchise him, the GM said, “Don’t know yet.”

END_OF_DOCUMENT_TOKEN_TO_BE_REPLACED

Right after the Seahawks’ season ended prematurely, we put forth an offseason to-do list that included extending Frank Clark, improving the defensive line, addressing the future of right tackle, re-signing guards, deciding the fate of their linebackers, adding a vet safety and, of course, extending Russell Wilson.

Earlier this month, we also outlined the projected market for Seattle’s free agents — predicting the team would franchise Clark and keep at least one of the guards while probably/possibly losing Earl Thomas, K.J. Wright, Justin Coleman, Mike Davis and Shamar Stephen.

We also listed pass-rush options beyond Clark — as a No. 2 pass rusher should be Seattle’s top outside priority.

If the Seahawks wanted to, they could retain Clark and at least one guard; extend Wilson, Bobby Wagner and Jarran Reed; and still have around $20 million for other moves.

Here’s a detailed look at how Seattle could accomplish all of that:

END_OF_DOCUMENT_TOKEN_TO_BE_REPLACED

This week’s wild Russell Wilson rumor aside, it has been a quiet stretch in Seahawks Land — no action since the team signed Paxton Lynch in mid-January. Like most of the rest of the league, the Hawks have been heads-down planning offseason moves and prepping for next week’s Combine.

John Schneider will have three tasks in Indy. Beyond scouting players and gauging the free-agent market, the biggest mission will be laying the groundwork for possible draft trades.

END_OF_DOCUMENT_TOKEN_TO_BE_REPLACED 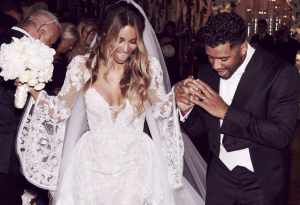 A day after the former NFL star suggested the Seahawks tag-and-trade Frank Clark for Antonio Brown, the funniest name in sports radio dropped this rumor: Russell Wilson might want to play for the New York Giants.

Cowherd said sources from the entertainment world are talking about Ciara’s desire to move to New York, where she would have better exposure in her music career. And then Cowherd connected the dots, suggesting Wilson would want to accommodate his wife and might push to play for the Giants.

So, fans everywhere want to know: How much credence should we put into this rumor?

END_OF_DOCUMENT_TOKEN_TO_BE_REPLACED

Russell Wilson could be guaranteed $100 million and Frank Clark $50 million in new deals, according to contract expert Joel Corry, who also laid out the possible markets for several other Seahawks in a conversation with John Clayton on 710 ESPN.

Per Corry, Wilson figures to hit $35 million APY (as we projected) if he signs an extension this year, Clark will aim for $20 million (if not franchised at around $17 million), K.J. Wright could get more than $7 million, and D.J. Fluker, J.R. Sweezy and Justin Coleman all could merit around $5 million on the open market.

All of those amounts, except Wilson’s, would be more than the Seahawks are expected to be willing to pay. But the markets for Wright, the guards and Coleman might not hit those figures either, Corry acknowledged.

END_OF_DOCUMENT_TOKEN_TO_BE_REPLACED

Right after the Super Bowl, Frank Clark was ready to get started with the Seahawks again: “Let’s get this paperwork (i.e., contract) done so we (can) go on this hunt. I’m tired of the same results.” The Seahawks have been in the playoffs in three of Clark’s four seasons, but it’s nice to see he is aiming higher — and wants to get there with the Seahawks. Now we just have to wait and see how that paperwork turns out.

Speaking of contracts: Talks have not yet begun between John Schneider/Matt Thomas and Russell Wilson’s agent, Mark Rodgers. But that’s no surprise. Those negotiations are not likely to occur until at least May. Meanwhile, right after the Super Bowl, Wilson tweeted: “2019. Going to be a special year.”