Just one year after Pete Carroll and John Schneider dismantled their legendary defense and surprised many by making the playoffs with young players replacing the departed stars, Carroll thinks his team is good enough as constituted to take the next step.

At the owners meetings in Phoenix, Carroll told John Clayton: “It’s going to be very difficult to make this team this year for the incoming guys. That’s because the depth is growing.”

He mentioned the offensive line, tight end, running back and cornerback as positions where the depth looks good. He also likes his safeties and is looking forward to having his best linebacking crew (assuming Mychal Kendricks avoids prison).

But we all know the Hawks can get better — they didn’t get home field or reach the Super Bowl last season, after all. And we already know which positions the Seahawks are going to prioritize in the draft: defensive line and receiver.

END_OF_DOCUMENT_TOKEN_TO_BE_REPLACED 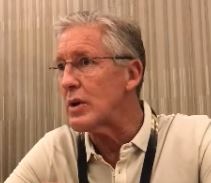 The NFL owners meetings run through Wednesday, and we should hear from Pete Carroll and John Schneider on Tuesday.

They won’t give many revealing answers, obviously, but here are some questions we have about the Seahawks as we finish Week 2 of the league year:

Thoughts on Russell Wilson aiming to be the top-paid player in the league? Think they will get something done with Wilson before the season starts? Have they talked much yet?

Carroll: “We’ve been in communication, sure. It’s very topical. We’re on it.”

END_OF_DOCUMENT_TOKEN_TO_BE_REPLACED

There’s much panic in the streets about whether the Seahawks are going to keep their top four players in 2020, and it has only intensified after pessimistic speculation by NFL reporter Mike Garafolo on 710 ESPN.

If you believe Garafolo (and others), the Seahawks probably won’t re-sign Russell Wilson, Frank Clark or Bobby Wagner before next year. And don’t forget about Jarran Reed, the fourth musketeer in this contract melee.

But here’s the truth of the matter: The Seahawks have the cap space to keep all four on market deals if John Schneider and Pete Carroll want them back, and they can guarantee they keep two of those players in 2020 without any extensions because teams are allowed to use both a franchise tag and a transition tag in the final year of the CBA (which 2020 will be).

END_OF_DOCUMENT_TOKEN_TO_BE_REPLACED

Few teams know Robert Quinn’s pass-rush ability better than the Seahawks, who used to be terrorized by Quinn when he played end for the Rams.

The 29-year-old has been a bad fit the past two years with the Rams and Dolphins and is now being shopped by Miami. The Seahawks should be interested.

END_OF_DOCUMENT_TOKEN_TO_BE_REPLACED 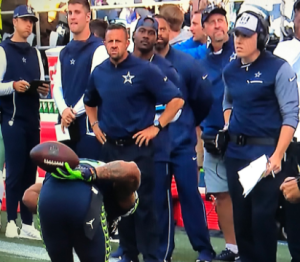 The return of K.J. Wright means there will still be two members of Seattle’s famed Legion of Boom defense on the field in 2019. But make no mistake: That unit is now officially gone.

Wright’s re-signing was a pleasant surprise after Earl Thomas’ long, slow goodbye finally ended with him heading to Baltimore for $13.75 million a year.

With Thomas gone, Wright and Bobby Wagner are the only ones who remain from Pete Carroll’s vaunted defense that helped lead the Seahawks to two Super Bowls and put together one of the most spectacular half-decades in league annals.

But the end also is in sight for Wright, who sounds like he’s going to retire after this two-year contract. And there is no guarantee Wagner will be around beyond this year, the final of his deal.

END_OF_DOCUMENT_TOKEN_TO_BE_REPLACED

In one swell foop Thursday, the Seahawks reset their offensive line for 2019 — bringing back D.J. Fluker and swapping in Mike Iupati for J.R. Sweezy (basically a trade with Arizona).

The Hawks now have four former first-round picks and one second-rounder as their line starters. You can hardly get better draft pedigree than that.

They also will return four starters to the line that led the league’s top rushing attack in 2018. They just have to hope Fluker and Iupati can stay healthy for Mike Solari — or at least combine with Jordan Simmons to put together 32 man-games at the guard spots in 2019.

Then John Schneider needs to work up a plan for beyond next season.

END_OF_DOCUMENT_TOKEN_TO_BE_REPLACED

As the league year dawns, the Seahawks already have lost six players and seem set to lose at least one more. None of it is unexpected though.

The Seahawks have long made it obvious they didn’t want to pay Earl Thomas or K.J. Wright, and they were never going to spend much on any of their other UFAs either.

The Seahawks already have roster replacements for Justin Coleman, Mike Davis, Brett Hundley and Thomas. So the club’s top priorities should be to re-sign D.J. Fluker, add a pass rusher and replace Shamar Stephen and Wright (assuming he leaves, too).

END_OF_DOCUMENT_TOKEN_TO_BE_REPLACED

But the biggest — maybe most unexpected — thing they learned: Bobby Wagner is going to cost a lot to keep beyond 2019. After Kwon Alexander and C.J. Mosley get paid this week, Wagner’s price is going to vault beyond $15 million a year.

END_OF_DOCUMENT_TOKEN_TO_BE_REPLACED

Which would you rather the Seahawks have for $20 million: Frank Clark OR two other pass rushers and two draft picks?

That really could be the choice the Seahawks face right now, assuming Clark won’t settle for less than $20 million a year.

We previously pointed out the Seahawks have options that do not include Clark, and we also offered up realistic trade considerations. Add those together and the Hawks can basically pay two pass rushers for the price of a $20 million Clark while getting a couple of picks in a trade (a No. 2 in 2019 and a Day 2 pick in 2020).