A third of the way through one of the most bizarre seasons ever (and we’re not just talking about the pandemic), the Seahawks are 5-0 and among the favorites to win the Super Bowl. And that’s despite having the league’s worst defense (by the standard measure: yards).

The Packers (4-0) have been more impressive so far, but the Seahawks might be more dangerous because they are a big-play team on both sides and should get better on defense as the season goes.

By DVOA, the Hawks are considered the No. 3 team in the league, behind Baltimore and Tampa Bay (buoyed by the No. 2 defense). Los Angeles is fourth, Kansas City fifth and Green Bay sixth. Those teams look to be Seattle’s biggest competition for a Super Bowl title.

END_OF_DOCUMENT_TOKEN_TO_BE_REPLACED

Tennessee’s virus outbreak is no surprise. It was inevitable that teams would have problems as the NFL pressed to play. It’s why we thought the NFL should sit out 2020.

But, the season has started, made it to the quarter pole with only one game (TEN-PIT) pushed to another week, and now the league has to figure out how to finish. While Tennessee faces TBD consequences for breaking league COVID rules, along with an uncertain playing future this week and beyond, the schedule is starting to become a topic that needs to be addressed (it should have been before the season started, but the reactive NFL doesn’t work like that).

Due to issues in Tennessee and New England, those teams’ games tentatively have been bumped to early next week – with next Thursday’s game also possibly affected.

This is just the first major issue of what always figured to be a significant concern. And the question is now at hand: What happens if teams end up playing different numbers of games due to the inevitable cancellations?

END_OF_DOCUMENT_TOKEN_TO_BE_REPLACED

As this oddest of NFL seasons begins, the Seahawks look strong enough to contend for the Super Bowl again – assuming (1) they aren’t hit by a bunch of COVID afflictions, (2) their lines hold up and (3) they learn how to play offense in the playoffs.

END_OF_DOCUMENT_TOKEN_TO_BE_REPLACED

As states begin to reopen, the NFL and players association are discussing ways to safely bring teams back together and eventually stage games — and, while we doubt there will be minicamps in June, it seems like training camps might be able to begin on time in July.

With teams limited to virtual meetings (see the Seahawks’ tight ends) this offseason, coaches are missing out on key on-field prep time. The lack of physical work is putting everyone behind their usual timelines, and those adding new elements (e.g, coaches, quarterbacks and receivers) will find themselves even further behind once camps begin.

So, teams that have few major changes should have a jump on the rest — which could help in the first few weeks of the season.

END_OF_DOCUMENT_TOKEN_TO_BE_REPLACED 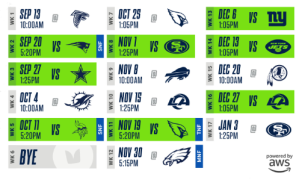 The Seahawks’ hopes of getting home field – the easiest way to the Super Bowl – will rely on winning early, surviving the middle and staying healthy at the end.

The schedule looks like it adds up to 10 or 11 wins, assuming the Seahawks improve their pass rush and their remade offensive line doesn’t get off to a terrible start.

END_OF_DOCUMENT_TOKEN_TO_BE_REPLACED

The Seahawks were supposed to be watching the Browns on Monday night — their homework for this week — but it was pretty hard to miss the team that dominated Baker Mayfield and company.

“That night was San Francisco’s night,” Pete Carroll said of the 49ers’ 31-3 win. “It didn’t matter what happened, really. The ball kept coming their way and they kept making the plays. They looked great.”

The Hawks play at Cleveland this week, but in a month they will be facing the 49ers in what figures to be a major Monday night showdown — impacting both the division and conference races.

END_OF_DOCUMENT_TOKEN_TO_BE_REPLACED

Seattle’s 2019 season will be defined in prime time in November and December.

The Seahawks got a very balanced schedule, highlighted by alternating home and road games through the first 14 weeks and four straight night games in the second half of the season.

The Hawks will play five prime-time games overall, including two against the division rival Rams.

Seattle also has four 10 a.m. games, but Pete Carroll doesn’t care (ask him). His teams are 13-11 in 10 a.m. starts (playoffs included) since Russell Wilson arrived, and they have won seven of the last nine (all three in 2018).

END_OF_DOCUMENT_TOKEN_TO_BE_REPLACED

The Seahawks could clinch a wild-card spot in two weeks — and they also would have a good shot at making the postseason even if they lost to both Minnesota and Kansas City.

The Hawks are currently given an 88 percent chance to make the postseason, according to FiveThirtyEight (Football Outsiders calls it 92 percent). There’s a chance that could improve to 100 percent before the Seahawks play Kansas City in Week 16.

If the Seahawks beat Minnesota next Monday and then the 49ers the following week, they would be 9-5 — good enough to lock in a playoff spot if three of these things were to happen: Carolina loses one more, Philadelphia loses one, Washington drops the next two, Minnesota also loses to Miami in Week 15.

END_OF_DOCUMENT_TOKEN_TO_BE_REPLACED

“We don’t have to lose anymore.” — Pete Carroll

Fresh off a comeback win against Green Bay that got his team back to .500, Pete Carroll thinks there’s no reason for his team to lose another game.

With the running game now on full blast — seven straight games over 150 yards — and the defense tightening up in the second half against good quarterbacks, the Seahawks certainly have a chance to win out.

Carroll told 710 ESPN that his team’s 5-5 record “sucks. Why are we here? We’re better than this. … We don’t have to lose anymore. We’re done with that stuff. Let’s go win some games.”