As Pete Carroll looks for Russell Wilson’s third offensive coordinator in 10 years, DK Metcalf has given his two cents about what happened to Seattle’s offense and Mike Holmgren has told us what the new coordinator needs to do to help Wilson.

Of course, a good OC would have worked around the Cover 2 schemes that oddly stymied Wilson and Brian Schottenheimer for the final two months of 2020. Holmgren, a first-generation West Coast offense disciple, said it is on the OC to adjust.

END_OF_DOCUMENT_TOKEN_TO_BE_REPLACED

The Seahawks are 2-0 for the third time in Russell Wilson’s career and the 12th time in franchise history.

END_OF_DOCUMENT_TOKEN_TO_BE_REPLACED

It’s fitting that Pete Carroll and Bill Belichick will set a record for the oldest coaching matchup in NFL history this week – the same week Carroll turned 69 (Belichick is 68).

END_OF_DOCUMENT_TOKEN_TO_BE_REPLACED

The Seahawks have been NFL drama queens almost from the start of the Pete Carroll/John Schneider era, so it’s never that surprising when some crazy news comes along.

But nothing ever done by the likes of rogues Marshawn Lynch, Richard Sherman and Michael Bennett or chuckleheads Leroy Hill, Percy Harvin, John Moffitt or Malik McDowell could top the situation Quinton Dunbar finds himself in.

Dunbar’s case (alleged robbery) is still working through the system, with conflicting reports (by the same people) of whether Dunbar was involved. We’ll keep following it and see how it turns out, but it certainly is one of the crazier crime stories ever related to the Seahawks. And they have had a few.

END_OF_DOCUMENT_TOKEN_TO_BE_REPLACED

If you liked the drama of Seattle’s past two games, you will love it when the Seahawks and Packers resume a series that has been one of the NFL’s best non-division rivalries for two decades.

This will be their 16th meeting since 1999, the most for each franchise against a non-division foe. It’s their fourth playoff meeting — also making them each other’s most common postseason foe in those 21 seasons.

END_OF_DOCUMENT_TOKEN_TO_BE_REPLACED

Are we entering the final four years of the Pete Carroll/Russell Wilson era? Or just the next four?

The recent death of Seahawks legend Chuck Knox brings to mind the future of Carroll, coming shortly after Wilson’s destiny was a hot topic in the wake of another record-setting QB deal.

Seattle’s coach and QB are signed for two more years, and the pessimist’s view says Carroll’s age and Wilson’s price could mean both are gone by 2022. But the Positive Petes out there would point out that Carroll is spry enough to coach 10 more years and Wilson has said he wants to play in Seattle for 20.

Either way, four looks like the magic number right now.

END_OF_DOCUMENT_TOKEN_TO_BE_REPLACED 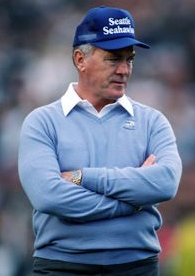 A few days ago, when talking about his goal to revive Seattle’s running game this year, Pete Carroll made a reference to another legendary Seahawk coach when he said, “It isn’t like three yards and a cloud of dust. It ain’t Ground Chuck.”

As it turned out, it was a timely reference to Chuck Knox, who died today at age 86. Knox was an old-school football man who used the running game to become the first coach to lead the Seahawks to the playoffs.

Knox immediately turned the Hawks into contenders when he arrived in 1983, took them to the playoffs four times in nine seasons and ranks second in wins (80) behind Mike Holmgren (86) and just ahead of Carroll (79). Knox, who also coached the Buffalo Bills and Los Angeles Rams, ranks 10th in wins (186) among coaches in NFL history.

END_OF_DOCUMENT_TOKEN_TO_BE_REPLACED

Steve Hutchinson is back in Minnesota this weekend for another big opportunity, 12 years after he left Seattle in one of the most infamous free agency moves in NFL history.

As he waits to learn whether he will be inducted into the Hall of Fame this year, making the media rounds in Minneapolis, he has discussed his off-field legacy almost as much as what he did on the field.

Most of the Hutch Poison Pill story is well-known by Seahawks fans, but Holmgren and Hutchinson got together on KJR on Thursday and revealed some more details of one of the most dramatic stories in NFL free agency history.

END_OF_DOCUMENT_TOKEN_TO_BE_REPLACED

Are the Seahawks and Packers about to engage in another deal involving a football boss?

In 1999, the Seahawks sent the Packers a second-round pick for Mike Holmgren, who became Seattle’s coach and general manager. Among the former Packers personnel guys Holmgren hired early in his Seattle tenure was John Schneider, who then bounced back to Green Bay in 2002 and returned to Seattle to join Pete Carroll in 2010.

Now, 19 years after that Holmgren trade, the Packers reportedly are trying to get Schneider back for a third stint with the team.

The Seahawks reportedly turned down the Packers’ request to interview Schneider, so the story is over unless: (1) Schneider really wants to go back to Green Bay and (2) the Packers want to give up a draft pick or two for him.

END_OF_DOCUMENT_TOKEN_TO_BE_REPLACED

The Seahawks are headed back to Green Bay this weekend to renew one of the best non-division rivalries in the NFL — the fifth time in five years they will have faced each other.

While the Hawks (8-3-1) fight to hold on to the No. 2 seed in the NFC, the Pack (6-6) is trying to get back in the hunt. It’s just the latest dramatic meeting between the two franchises, which have been deeply intertwined since 1999.

Newer Seahawks fans might think the Packers-Seahawks series consists of three games: the Hawks’ infamous Fail Mary victory on a Monday night in 2012, Seattle’s 20-point win in the opening game of 2014 and Seattle’s miracle comeback in a 28-22 overtime win in the NFC title game.

But this series was full of great matchups back when Mike Holmgren and quarterback Matt Hasselbeck were leading the Hawks against their old team — led by Brett Favre — and this will be the 13th meeting since 1999.