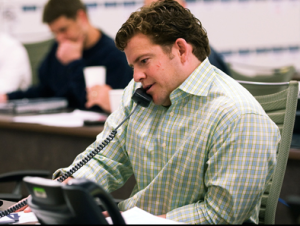 John Schneider has made at least one trade in the preseason in each of his six years in Seattle, so it’s no surprise to hear he is trying to make another this year.

Schneider reportedly is shopping Patrick Lewis, who apparently has lost the battle for the backup center spot to rookie Joey Hunt.

Plenty of teams need offensive line help, and Schneider surely could find one interested in a player who has started 13 games over the past two years. Lewis’ salary is $1.67 million, which could be a hindrance to a trade. Lewis, a former undrafted free agent, probably wouldn’t bring any more than a late pick.

The Seahawks’ roster this summer is as deep as — or perhaps deeper than — it was in 2013, when the team went 13-3 and won the Super Bowl. With cuts looming this week — to 75 on Tuesday and to 53 on Saturday — the Seahawks are going to let a number of good players go. It only makes sense to try to get something for a couple of them, if possible.

Schneider made four trades last summer, dealing Kevin Norwood to Carolina and Christine Michael to Dallas while helping the short-staffed secondary with trades for Kelcie McCray and Mohammed Seisay. Those moves netted Seattle two seventh-rounders while costing a fifth and sixth.

This summer, the Seahawks are deepest at defensive line and defensive back and seemingly could fetch a pick or two for guys in those position groups. The Seahawks probably could get something for Jordan Hill, if they thought Brandin Bryant would be the better keeper. (Of course, they might keep both.)

In the secondary, the Seahawks cut Brandon Browner today, so they could be planning to keep Tyvis Powell, Tye Smith and Marcus Burley. But, if they are going with just nine defensive backs, they could try to move one of the cornerbacks. Smith, drafted in the fifth round in 2015, or Burley, acquired in a trade in August 2014, could net a late pick. 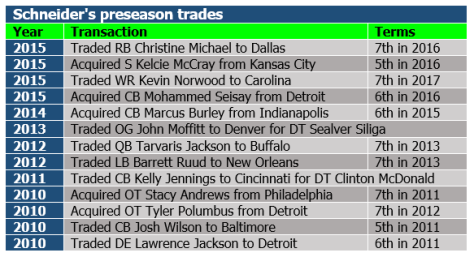 One thought on “No surprise Schneider is shopping Lewis (or others)”