As the Seahawks prepare to cut from 90 to 75 players and then play a game two days later and then cut to 53 two days after that, Pete Carroll said his team is ahead of where it was last year.

“It’s just felt very forward moving,” he said. “The whole time we’ve just been working and growing and dealing with stuff to come together as a team. The learning process and the teachable moments, everybody is in. It’s really been a terrific camp. It’s been a fantastic offseason and a terrific camp of growing.”

That’s a big contrast to the last two years. In 2014, the Seahawks were dealing with Marshawn Lynch rumors and the Percy Harvin headache. Then, last summer, Kam Chancellor messed with team chemistry when he held out into September.

“We’re trying to grow as a team and start this season in a more connected level than we have been in the past years,” Carroll said. “We’ve had a couple distractions that are difficult and challenging and we’ve learned from it and we’ve handled it, but not as well as we would have liked. It’s just felt like we’re ahead of that pace this season.

“We’ll see how it goes,” he added. “You never know until you start playing, but we’re looking forward to that.”

The Seahawks won’t start playing for real until Sept. 11, and they have a bunch of roster decisions to make in the interim — starting Tuesday.

Here’s a look at the roster heading into those cuts:

Russell Wilson looked pretty good against Dallas, throwing two touchdown passes. He still looks a little out of sync and jittery at times, but he should shake out of it once he starts playing every snap. Trevone Boykin has done enough to secure the backup gig — especially considering he likely will never play (Wilson doesn’t take a lot of big hits, and he bounces back from the ones he does take). Jake Heaps apparently will remain on the roster through final cuts; Carroll said he will play vs. the Raiders on Thursday. 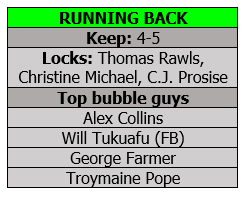 C.J. Prosise finally got into a game, and Carroll was pleased with his performance against Dallas.

“I was really happy with C.J.’s first outing,” Carroll said. “He looked fast. He was confident. He had fun playing. He came off the sidelines and he was having a ball playing football. He was poised about it and handled it well. He had a couple nice runs and we’re just going to keep going; this is a big week for him. It’s just a big week to have him in practice again, but the game will be important. He’ll play quite a bit this game.”

While Prosise is a lock to make the team, the other backs are trying to prove they are worth taking a fifth spot. The Seahawks typically lean toward keeping four backs, so it would be no surprise if they keep just three tailbacks and a fullback (probably Will Tukuafu).

None of the second-tier guys has stood out. Fifth-round pick Alex Collins, converted youngster George Farmer and underdog Troymaine Pope all carried the load at various times — in practice, late in preseason games — but none has risen above the others. Collins probably would be the No. 5 guy if they kept that many, but keeping four would give Seattle another offensive line spot.

As Paul Richardson showed against Dallas, the top four receivers are so good that no one else is going to get on the field. The Hawks probably will keep five, with the best special-teams player getting the final spot. Kasen Williams and Kevin Smith have been AWOL due to injuries, and Tanner McEvoy has shown the most among the others. But he is not going to play vs. Oakland, which could give someone like Kenny Lawler or Antawn Goodley a shot at that final spot. It is likely to be a rotating position throughout the season anyway.

Brandon Williams had his best game vs. Dallas, which was good to see because Nick Vannett is questionable for the opener. The Hawks surely will keep four here, especially with Vannett injured and Jimmy Graham still working his way back. He had a great pregame workout, Pete Carroll said, which makes it seem like he could be back for the opener. But Williams offers good insurance, as well as top special-teams help. 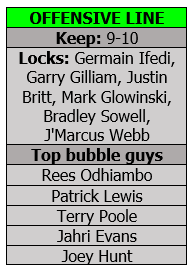 J’Marcus Webb looked pretty good in his first action with the Hawks. He played both tackle spots against Dallas, and the Seahawks ran it really well when he flipped to left tackle in the third quarter. “I thought he did a great job. It was great to see him out there,” Carroll said. “He did a very solid job on the right side and flipped over and was very comfortable on the left side. … He’s battling for a spot to play now, he’s right there in there, so we’re very happy about that.”

After all of the talk of moving Garry Gilliam to left tackle, it looks like Bradley Sowell is the favorite there and Gilliam is fighting off Webb at right tackle. “There’s competition really cranking at right tackle,’’ Tom Cable said. “That doesn’t mean it’s done at left — it’s not. But that’s ahead of where we are at right tackle. So the competition is all three guys. But right now it’s pretty heavy at right tackle.’’

That means we should see a lot of the three tackles in Oakland on Thursday.

The question then becomes whether the Hawks keep three or four more reserves. Third-round rookie Rees Odhiambo seems like a lock — the coaches have been training him in a swing role, and he focused on the left side last week.

The last two or three spots seemingly come down to Patrick Lewis, Joey Hunt, Terry Poole and Jahri Evans. Poole has looked pretty good at right tackle and probably would be the 10th guy if they keep that many. If they keep just nine, Evans and one of the two centers likely would be the final two. Hunt seems to be getting every chance to beat out the more expensive Lewis — but do the Hawks really want a rookie backing up a first-timer starter?

The defensive line seems pretty set. The coaches probably will lean toward keeping 10, counting Cassius Marsh, who has played most of his snaps this preseason as a pass rusher. The biggest surprise here is the return of Tony McDaniel, who clearly has played well enough to make the roster — and possibly start.

The biggest disappointment has been Sealver Siliga, who has been out with a calf injury all preseason; he seems destined for injured reserve or an injury settlement. Jordan Hill and Quinton Jefferson almost surely have spots locked up, so the only real question is the 10th spot: Will UDFA Brandin Bryant be the guy? 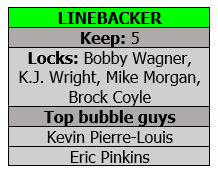 Eric Pinkins seems to have fallen out of the linebacker battle, and Marsh’s versatility means the Hawks could go with just five others. Kevin Pierre-Louis’ speed and special-teams contributions make him a likely keeper. The Seahawks usually keep the bare minimum two-deep at linebacker — remember, they have Kam Chancellor as a mini-‘backer as well.

The secondary is the most intriguing position. The top seven are set, leaving two or three spots. Is the Brandon Browner safety experiment over? He has played with the deep reserves this preseason and was never a lock to make the roster, despite Carroll’s grandiose plans for him.

UDFA Tyvis Powell has shown a lot on special teams and might already have earned a roster spot. Tye Smith and Marcus Burley also are in the mix. Smith, a fifth-round pick in 2015, has too much potential to let go, so the last spot should be between the safety Browner and the nickel back Burley.

Jon Ryan and Steven Hauschka are in midseason form, booming the ball all over the field. The only question among the three special-teams spots is the long snapper: It’s no guarantee that erratic Nolan Frese will keep his job. Perhaps the Seahawks will use money they save from someone like Patrick Lewis or Sealver Siliga to bring back Clint Gresham.