It was Running Back Day at Seahawks camp on Monday.

As Christine Michael continued to receive accolades for his performance in Kansas City, Thomas Rawls, C.J. Prosise and Zac Brooks all returned to practice — and the Hawks released Cameron Marshall and moved Kyle Coleman to fullback.

On top of that, Alex Collins — limited by an ankle issue in Kansas City — is ready for more of a load this week.

So, as they prepare for their preseason home opener vs. Minnesota, the Hawks finally have all of their backs back.

END_OF_DOCUMENT_TOKEN_TO_BE_REPLACED

It took Christine Michael a long time to figure out how not to be a “knucklehead.” But is it too late now?

The 2013 second-round pick never cared enough to try to unseat Robert Turbin as Marshawn Lynch’s backup. And then, last year, he lost his roster spot to undrafted Thomas Rawls, who was such a revelation that he is expected to replace Lynch permanently as Seattle’s No. 1 back.

It took injuries to Lynch, Turbin (waived injured last summer) and Rawls for Michael to finally get some playing time in Seattle. And that happened only after he was traded to the Cowboys, released, picked up by the Redskins and released again.

Michael did well in his return to Seattle, averaging 4.9 yards per carry in the final three games of the season and rushing for 70 yards in the playoff win over Minnesota (Lynch returned for the loss to Carolina, so Michael did not get a carry in that game).

END_OF_DOCUMENT_TOKEN_TO_BE_REPLACED

The countdown is well underway, with camp starting in about two weeks. Let’s look at some pre-camp player reports from some of the local outlets:

Bob Condotta looks at the importance of first-round pick Germain Ifedi working out.

Thomas Rawls said he is aiming to be ready for the start of camp.

Collins is among 710 ESPN’s 25 Most Intriguing Seahawks.

Others on that burgeoning list include Jeremy Lane, Jordan Hill and rookie Tyvis Powell.

END_OF_DOCUMENT_TOKEN_TO_BE_REPLACED

Seahawks.com runs down every draft pick, with quotes, photos, audio and more.

Even as the Seahawks put together their most conventional draft under John Schneider, they still managed to go in a different direction than the rest of the league.

The Seahawks took a lot of linemen and running backs because that is where the draft led them.

END_OF_DOCUMENT_TOKEN_TO_BE_REPLACED 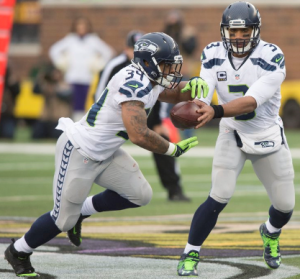 How many running backs does it take to replace Marshawn Lynch while he rides off into the sunset on a camel? Apparently three.

As Lynch led their running game for most of the last six years, the Seahawks had drafted just four running backs (including one fullback). Now, with Lynch retiring — yes, he is, Pete Carroll and John Schneider confirmed — the Seahawks added three backs in this draft alone.

But none of them will displace Thomas Rawls as the starter. Carroll made that clear Saturday after the Seahawks added Alex Collins and Zac Brooks to a backfield that already included third-rounder C.J. Prosise, Rawls and former second-rounder Christine Michael.

“Thomas gives us a great element in his style of play. We love the way he is physical and aggressive and tough,” Carroll said of the second-year back who took over for an injured Lynch as a rookie and rushed for 830 yards before suffering a broken ankle against Baltimore in Week 14.

“I think the message of who we are and what we’re about has been Thomas,” Carroll said. “We’re really excited to continue to see that.”