“We’ll continue to explore options.  … There’s a number of guys still available, and we’re gonna continue to work through that.” – John Schneider on quarterbacks

When it comes to replacing Russell Wilson, the Seahawks basically have three options: (1) Get an experienced, expensive vet to start now; (2) do a repeat of 2012 with Drew Lock battling a rookie and maybe Geno Smith; (3) play for the 2023 draft, expecting Lock to lose more than he wins.

Plenty of fans (call them the Rebuilders) want the latter, but that is not Pete Carroll’s style, especially at age 70.

And it indeed sounds like Carroll and John Schneider prefer Option 1. They reportedly want to add a veteran starter and have reached out to both the Browns and Falcons, about Baker Mayfield and Matt Ryan – plus others.

END_OF_DOCUMENT_TOKEN_TO_BE_REPLACED

Russell Wilson apparently really did want to stay in Seattle — so much so that he gave the Seahawks a pretty good deal.

If reports on the money are correct, the Seahawks basically tore up Wilson’s contract and gave him a new five-year pact worth $157 million.

END_OF_DOCUMENT_TOKEN_TO_BE_REPLACED

Matt Ryan just became the NFL’s first $30 million player, and the handwringing is already beginning about Russell Wilson’s next contract.

Ryan reportedly signed a five-year deal worth $150 million, with $100 million guaranteed. So there’s the new bar for quarterbacks; Aaron Rodgers and Wilson (and maybe another QB or two) will surpass it in the next year.

Wilson is signed through 2019, so the Seahawks will need to extend him next offseason. However, it sounds like Wilson’s camp is expecting to get the franchise tag in 2020, which would mean Wilson’s agent, Mark Rodgers, does not think the Seahawks will meet his asking price next year.

END_OF_DOCUMENT_TOKEN_TO_BE_REPLACED

What happened Monday night in Seattle was no surprise — it was just more of the same stuff we have seen all season from Pete Carroll’s unsteady Seahawks.

It all added up to a 34-31 home loss to Atlanta that was not as bad as the ridiculous defeat to Washington two weeks earlier but still wiped out any thought of a first-round playoff bye for Seattle this season.

These are not the 2014 Seahawks, who also were 6-4 after 11 weeks and then won their final six. That team had the NFL’s best running game and the No. 1 scoring defense, which is why it overcame its No. 1 ranking in penalties. These Hawks are No. 1 in only one of those categories — the penalties — and just aren’t complete enough to do any damage even if they do make the playoffs.

END_OF_DOCUMENT_TOKEN_TO_BE_REPLACED 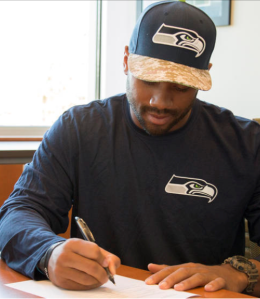 Quarterback contracts are just a game of leapfrog, so it’s no surprise to see Derek Carr jumping over Andrew Luck as the highest-paid passer in the NFL.

It’s easy to see where the market is going — a few more guys will leap Carr before the Seahawks and Russell Wilson start talking extension in a couple of years.

At least four more deals are likely to exceed Carr’s $25 million a year, and the APY could be around $30 million by 2020.

END_OF_DOCUMENT_TOKEN_TO_BE_REPLACED

That was one question no one needed to ask Richard Sherman on Sunday, when he brought back his 2012-13 incarnation with a tantrum that had everything but Tom Brady and Erin Andrews.

Outside of using his fame to make money and social statements and rip the NFL, Sherman had been pretty quiet ever since getting paid in 2014 and then having a baby last year. But he gave us all a little Retro Richard on Sunday, conjuring memories of his attention-seeking days as he put himself in the middle of two controversies in Seattle’s nail-biting win over the feisty Falcons.

His big sideline explosion – a hair-on-fire reminder of his blowup to Andrews after the 2013 NFC title game – and the non-call on his pass interference against Julio Jones at the end will elicit all kinds of chatter this week.

But that’s all for drama queens and grumpy losers. They’ll get over it and “chill,” just like Sherman did.

END_OF_DOCUMENT_TOKEN_TO_BE_REPLACED

Over the offseason, the Seahawks talked about tweaking their defense to account for the short passing attacks some savvy offenses have used to beat them.

Although Miami and the Jets worked the short game with some success in the first month, they didn’t do it well enough to beat the Seahawks. But now the Hawks are about to face their first big test against a quarterback and skill players who are capable of beating them the way Tom Brady, Philip Rivers, Aaron Rodgers, Andy Dalton and Cam Newton have in recent seasons.

Sure, Atlanta’s 300-yard man, Julio Jones, will have a fun matchup against Richard Sherman. But the Falcons the Hawks need to be most concerned about are running backs Tevin Coleman and Devonta Freeman.

END_OF_DOCUMENT_TOKEN_TO_BE_REPLACED

We have known for a while that the holdup in negotiations between the Seahawks and Russell Wilson is guaranteed money, and another report this week reiterated that the sides are far apart in that category.

This contract should not be difficult, so clearly at least one side is being unreasonable.

The issue is probably a blend of the Hawks not offering enough and Mark Rodgers, Wilson’s agent, wanting too much.

Among the likely sticking points:

1 — The Seahawks might still be stuck on rolling annual guarantees and are well below the $40 million in fully promised cash they should be offering Wilson in a four-year extension.

3 — Rodgers reportedly is leaning on the franchise tag — and its guarantees — in negotiations.