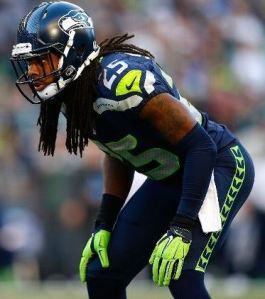 Despite the skepticism by Pete Carroll and John Schneider that a Richard Sherman trade will materialize this offseason, it sounds like there is a better chance than anyone might have thought a month ago.

As Schneider today reconfirmed that the Seahawks are fielding offers, a report out of Boston indicated that the Patriots are still ones to watch in this drama.

Other teams have pursued Sherman more aggressively, a source told the Boston Herald, but the Patriots could become top suitors if they lose Super Bowl XLIX hero Malcolm Butler (the Saints have been the team most linked to acquiring the restricted free agent).

“(Sherman) knows what’s going on. We know what’s going on,” Schneider said. “I don’t know if anything would ever happen. Like I tell people all the time: 98 percent of the deals that we’re involved with, we don’t follow through with. But at least we’ve opened that door, gone down the road and seen what’s behind Door A or Door B.”

Right now, it looks like there is not enough Monty Haul behind Door A or Door B. The Seahawks surely are not going to deal Sherman for anything less than a first-round pick — plus probably another asset (pick or player).

The key is finding a team willing to pay for an All-Pro corner — a team that would prefer a proven NFL shutdown corner over drafting a cover guy from this very deep class.

It sounds like there is an active market for Sherman that could very well get hotter as the draft approaches.

The Patriots would have to be creative because they already have traded their first-rounder (to New Orleans for Brandin Cooks) and second-rounder (to Carolina for Kony Ealy).

Tennessee has a big need for a corner, plus the draft capital (two firsts and two thirds) and cap space ($40 million). San Francisco, which is running Seattle’s defense, and Jacksonville also could be options.

As for the willingness of Carroll and Schneider to admit they are willing to trade Sherman, it serves several purposes: (1) It’s a big message to Sherman and fans that they are very displeased with Sherman’s anti-team antics; (2) it serves as a warning to other Seahawks not to put themselves above the team; (3) it tells other teams the Hawks are open for business.

Carroll first made that clear at the NFL owners meetings, saying, “There have been some teams that have called, and so we have talked about it. But he is extremely important to our football team. I don’t see anything happening at all. I don’t see anything happening with any of our players, just the banter that’s out there right now. But it has been talked about. He is a great player and he can impact a team. I can see why people would be interested in him.’’

One thought on “Despite skepticism, Sherman trade looks very possible”