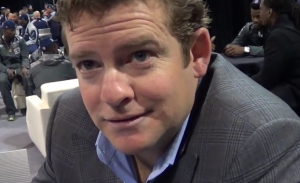 DRAFT COUNTDOWN: 2 weeks. Every Thursday until the draft, we look at draft-related topics involving the Seahawks.

On Wednesday, KJR’s Mitch Levy asked jokingly which player the Seahawks are going to pick at No. 26, and Schneider quickly retorted, “Who says we’re picking at 26?”

Schneider wasn’t kidding either. He said this draft is made for trading down, “quite honestly.”

Schneider said this is the best draft since he took over as Seattle’s GM in 2010, “from a pure numbers standpoint.”

The draft is especially deep in the two areas where the Seahawks need help: offensive line and defensive tackle. And that explains why Schneider will once again be looking to move down.

“You always have to find a partner, and that can be somewhat difficult throughout the day and throughout the weekend,” the GM said. “But this is one of those drafts (that make you want to move down).”

If the Hawks bail out of the first round again, they would be the first team since the Minnesota Vikings in 1989-92 to do it in four straight drafts. And it would be further evidence that Schneider is indeed becoming the contemporary Bobby Beathard.

Schneider said his pro personnel staff is tasked with tracking the needs of other teams and getting a feel for the draft philosophies and trends of decision makers.

“We try to be on it as much as we possibly can,” Schneider said, “so we know how far we need to move back or move up (to get the player they want).”

As for the players the Hawks might have their eyes on after dropping into the second round, the top options seem to be defensive linemen Jonathan Bullard and Vernon Butler (who both have visited VMAC), with offensive linemen Germain Ifedi and Jason Spriggs logical possibilities.

A move down from 26 likely would net a fourth-rounder — that’s what Seattle got from Minnesota for moving down from 32 to 40 in 2014. A move deep into the second round could bring a third-rounder, but Schneider probably wants to stay in the top 50, knowing he has another pick at 56.

It’s a misnomer to say Schneider does not draft for need. Every team does it, and the Seahawks are no exception.

Schneider has always said the Hawks draft for their roster, which is another way of saying they draft for team needs — current or future.

“We grade for our team; we don’t grade for the league,” he repeated to KJR, adding that their philosophy explains seemingly “random” picks over the years. He said it’s why they reached for James Carpenter at No. 25 overall in 2011.

It’s also why they picked Bruce Irvin so high in 2012 and Justin Britt so high in 2013. It’s why they traded three picks to get Tyler Lockett last year, and it’s why they looked ahead in drafting guys like Frank Clark and Mark Glowinski.

The Seahawks surely will do some looking ahead in this draft as well — don’t be surprised if they take a safety or tight end with one of their Day 2 picks.

With Kam Chancellor wearing down, they could look at Florida’s Keanu Neal (if he slides) or Southern Utah’s hard-hitting Miles Killebrew.

Although Schneider said he expects Jimmy Graham back for the opener, it is possible the star tight end will start the season on PUP. Luke Willson could use some help in that case.

Even if Graham is ready to go for Week 1, Willson is entering the last year of his contract, and the Hawks might want to cover themselves for 2017. That could lead to Ohio State’s Nick Vannett or Stanford’s Austin Hooper.

UCLA DT Kenny Clark, Bob Condotta of The Seattle Times: Offensive line is considered by many to be the Seahawks’ most obvious need. But they also need defensive tackles and might find the best value by dipping into one of the deepest pools of talent at that position in decades. Clark would help fill a need as a replacement for the departed Brandon Mebane, a player to whom he has often been likened.
Our take: For the exact reasons of DT depth Bob mentions, it seems unlikely the Hawks will jump for one right off the bat.

Baylor DT Andrew Billings, Todd McShay of ESPN: McShay also thinks the Hawks should take Alabama RB Derrick Henry in the second and Texas Tech OT Le’Raven Clark and Minnesota CB Briean Boddy-Calhoun in the third.
Our take: McShay would give the Hawks an A for those picks. We give him a C. If the Hawks do keep their top pick, they seem more likely to go with Florida DL Jonathan Bullard or Louisiana Tech DT Vernon Butler. Even though Henry has visited VMAC, it’s hard to see the Hawks going RB in the second. Clark could be an option in the third, but the Hawks seemingly would prefer other players. The Hawks will not go corner in the third round, especially when that corner’s arms are under 32 inches (Boddy-Calhoun is at 31).

Louisville DT Sheldon Rankins, Nate Davis of USA Today: He’s a slippery one who, like Michael Bennett, can play inside and out. Seattle definitely needs to reload its D-line, which takes this unit to another level when it can constantly rotate capable bodies.
Our take: Rankins would be such a tempting pick if he actually lasted to 26, but most projections have him gone in the top 15 or so.

Kansas State OG Cody Whitehair, Rob Rang of CBS Sports: Just two years removed from their championship run, the Seahawks are essentially starting over along the offensive line, with zero of the starting five blockers from Super Bowl XLVIII still on the roster. A four-year starter with experience all over the offensive line, Whitehair possesses the versatility, toughness and dependability this club is lacking up front.
Our take: If the Hawks are OK with his average strength, they might be willing to take him if he’s there after they trade down. Seems unlikely.

One thought on “‘Who says we’re picking at 26?’ Schneider wants to move down again”