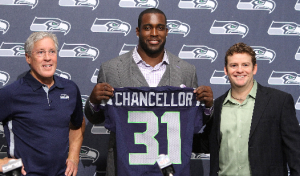 No matter how the season ends for the Seahawks, they have some key changes to make next year.

They certainly don’t need to blow up the team completely – even if they miss the playoffs. But they will need to make a few small detonations — even if they make the postseason and even if they somehow manage to win the Super Bowl (which seems like California dreamin’ at this point).

Whether Pete Carroll intends to stay beyond 2016 or not, John Schneider needs to fix the problems that have been holding this team back from greatness and help avoid becoming, as he has called it, “one of those teams that skates in and skates out” of contention.

Bottom line: The Seahawks cannot go through another year with such a disjointed offense holding back a potentially great defense. And they have to make some changes to the defense as well – beyond Bruce Irvin leaving in free agency (they will get a taste this week of how Frank Clark and Kevin Pierre-Louis might replace him).

This subpar season has been undermined largely by a horrible offensive line, Russell Wilson’s regression (partly due to the aforementioned line) and Kam Chancellor’s holdout.

Chancellor needs to go. You cannot keep a malcontent, especially when he appears to be going through the motions and playing for a paycheck. He has made one play all season – and he whiffed on Andre Ellington’s game-clinching touchdown run Sunday night.

Earl Thomas referenced teammates who are not giving it their all or won’t “give it up for the team.” Chancellor sure seems to be one of those.

Schneider needs to trade Chancellor in the offseason – a move that would net $4.1 million in salary cap space and perhaps a second-round draft pick.

Marshawn Lynch’s time probably should be up, too. Thomas Rawls has been more effective behind this sluggish offensive line, which requires speed to the hole, and Lynch is becoming more and more a part-time player as he suffers through various ailments (currently an abdominal issue). His departure would net Seattle $6.5 million next year.

Yeah, yeah, yeah, we know many fans will call those suggested moves blasphemy, claiming Chancellor and Lynch have been the heartbeats of this team and that getting rid of them would kill Seattle’s identity.

In case you haven’t noticed, Seattle’s old hard-hitting personality is dead and gone this year. It might come back in the final seven games, but that doesn’t change the fact that Seattle needs to redefine both the offense and defense next year. Chancellor and Lynch are not going to last much longer anyway, and Seattle needs to be proactive about evolving its roster.

The $10.5 million saved by the departures of Chancellor and Lynch could help Seattle fix its O-line and retain run stoppers on the D-line. Seattle is slated to have $23 million in space under a $150 million salary cap; but, the team will have around two dozen free agents to address, so that money will go fast. It also could – and probably should – add $3.83 million by releasing Cary Williams, who isn’t really worth the deal Seattle gave him this year.

The majority of Seattle’s resources next offseason must go into upgrading the O-line. There’s not a single position among the five that could not be significantly better. It’s well past time to give Wilson some protection and stop relying on him to make decisions under duress. He has failed behind this line this year – because the coaches and front office have failed him.

Cleveland center Alex Mack, rumored to be on the trade market earlier this month, has the option to become a free agent next year; the Seahawks would have to be highly interested. They also could explore trades for left tackles Joe Staley (49ers) and Joe Thomas (Browns), who both reportedly were on the block this month as well. And Schneider surely knows where else he can look for possible line upgrades via trades.

Seattle will have to decide whether to try to keep left tackle Russell Okung and right guard J.R. Sweezy. Neither is worth as much as he might want — Okung has been making $8 million a year on his rookie deal and Sweezy might seek as much as $4 million – and the Seahawks would be no worse for letting them go and adding better veterans and draft picks.

As it stands, with free agents factored out, the projected 2016 line would include Garry Gilliam (at right or left tackle), Justin Britt (at left guard or right tackle), center Drew Nowak, right guard Mark Glowinski and either Kristjan Sokoli or Terry Poole. There is no way the Seahawks can go into the season with that crew starting. They need to find a veteran center and tackle and draft on top of that.

A report Thursday indicated that teams will be able to trade comp picks starting next spring. That rule change clearly would help the Seahawks move around in the draft, perhaps moving up to get a good lineman.

Early mock drafts unsurprisingly have Seattle going O-line in the first round, with Michigan State tackle Jack Conklin the favorite, and Seattle will have to do a better job of drafting linemen than it has recently. Maybe it’s time for Schneider to stop listening to Tom Cable and just draft the best linemen available rather than reaching for projects such as James Carpenter, Britt, Sweezy, Sokoli and Poole and relying on undrafted guys such as Alvin Bailey and Gilliam.

In addition to fixing the offensive line, Schneider will need to focus on the D-line. Starting tackles Brandon Mebane and Ahtyba Rubin both will be free agents, and Michael Bennett probably will be peskier about his contract dissatisfaction. Schneider will need to re-sign at least one of the tackles, find another cheap veteran run stopper and – most likely — decide what to do with Bennett (pay him more or trade him).

If the offense does not improve drastically and help the Seahawks make a deep playoff run, Carroll also is going to have to reconsider his coaching choices on that side.

Carroll knows nothing about offense, and he has proven it by the silly way he has constructed this one – relying completely on Cable to cobble together neophyte blockers and, more than that, Wilson and Lynch to carry the offense with their unique skills. Darrell Bevell, the main play caller, has not been able to fit the pieces together well enough to form a consistently productive unit.

Many people have been calling for Bevell’s ouster (we certainly did after one ill-fated Super Bowl play that shall remain nameless), and plenty of smart fans we know are fed up with Cable’s failed project lines.

Carroll has been steadfast in his support of Bevell, but it’s time for owner Paul Allen to command a change there – whether it’s telling Bevell to start being more creative (misdirection, tempo, etc.) or telling Carroll to get a new offensive coordinator so this offense can actually find some consistency.

Carroll and Schneider have spent the last five years building this team into a Super Bowl contender. It has required plenty of tough decisions along the way – e.g, letting go of guys such as Chris Clemons, Red Bryant, Golden Tate, Breno Giacomini, Max Unger, Byron Maxwell – and it will require even more tough choices if the Seahawks are going to remain contenders.

Whether the Seahawks rally to make the postseason or not, Carroll and Schneider are going to have to make some big changes next year if they want this team to keep/regain its winning edge.

2 thoughts on “No matter how season ends, Hawks have to make changes next year”