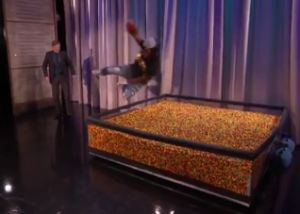 It’s vacation time for the NFL, but on Monday the Seahawks hogged the sports spotlight as three of their top players talked about their contract situations and more.

While Michael Bennett babbled more nonsense about holding out, Russell Wilson made it clear he will show up no matter how much he is making. And then Marshawn Lynch finished the day with another hilarious appearance on “Conan,” saying (among other things) the $12 million the Hawks are paying him this year was a good reason to put off retirement.

Bennett has been blowing hot Hawaiian air about holding out for several days. He wants more than the $6 million he is due this year. But he obviously knows he won’t get it, and his threats to hold out appear only half-hearted.

On Saturday, he told Honolulu TV station KHON, “Of course, I think I’ve outplayed the contract that they gave me. It’s one of those things where you have to let your agent do the talking with the team and hopefully something good comes out of it. It never hurts to try.”

As for the possible holdout, he told KHON, “Hawaii’s weather is great, so I’ll just keep it at that. … I don’t mind staying home for a little while.”

On Monday, he told NFL Network that a holdout is “definitely possible” and explained his reasoning for a raise: “I know a lot of people disagree because I don’t put up all the numbers; but, if you watch the games, I’m doing good things. They want me to play five positions but pay me for one.”

Even if he decides to pout some more and stay away, Bennett is not likely to sit out long — he’ll probably pull a Marshawn and be back a week into camp when he gets tired of being fined.

Meanwhile, Wilson definitely will be there from Day 1. As he told an ESPN NASCAR reporter at a charity event Wilson co-hosts with Kasey Kahne, “No matter how much I’m getting paid — whether it’s $25 million or $1.5 million — I’ll be ready to go.”

He repeated his love of Seattle and his trust that it will all work out in the end.

Lots of people made a big deal out of the $25 million mention, and Mark Rodgers (Wilson’s agent) joked about that by tweeting: “I wish he had said $40 million. Then this would really be interesting.”

About the time Wilson’s interview was airing, Lynch was appearing on the East Coast broadcast of “Conan” — a reprisal of his hilarious appearance just before the Super Bowl.

Before diving into a big sand box of Skittles at the end, Lynch joked with Conan about all of his fines, including the ones for his R-rated habit of grabbing his “ding-ding” while diving into the end zone, and he once more discussed the philosophy of Beast Mode (Conan’s hair is in Beast Mode, Lynch cracked).

Asked about rumors that he was thinking of retiring after last season, Lynch said, “In this game, at this running back position, you don’t go that long. But I mean, whew, when they put ($12 million) in front of you for a year, you start to think, ‘Yeah, maybe I could do this again.'” (No word on whether he will play beyond 2015 though.)

Lynch reiterated that he holds no grudge about the final play of the Super Bowl (something he told a Turkish TV host in March). He said he thought he would get the ball and was surprised he didn’t, but he said again that he plays a team sport and “I can’t be mad at the situation. I’m good with it though, to be honest. That’s what time it is.”

On Monday, it was Seahawks time all day.