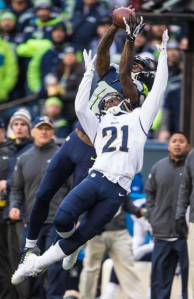 It was easy to fall into the trap thinking: The Seahawks’ offense had put up 35 points against a tough Arizona defense, so they should be able to score two or three touchdowns against the St. Louis Rams, right?

Russell Wilson and company moved the ball pretty well at times, amassing 354 yards, but they turned the ball over twice and otherwise shot themselves in the foot as they were blanked on the scoreboard in the first half for the first time since 2011. They needed some help from the defense in the second half, too.

A week after rushing for 267 yards on 34 carries, the Hawks tallied just 132 on the same number of runs vs. St. Louis. And Wilson, who was sacked just once and hit a mere four times by Arizona, was sacked three times and hit seven by the Rams, not including a big hit he took on a first-half run.

So, it appears the Arizona game was an anomaly, and the true Seattle offense remains the one that struggles to sustain drives and score touchdowns. In three of the six wins to close the season, the Hawks scored just one offensive touchdown.

But Pete Carroll is not concerned, especially when the Hawks faced Arizona’s No. 5 scoring defense, San Francisco’s No. 10 scoring defense and St. Louis’ red-hot unit, which ranked second to Seattle in points allowed since Week 9 thanks to consecutive shutouts of Oakland and Washington.