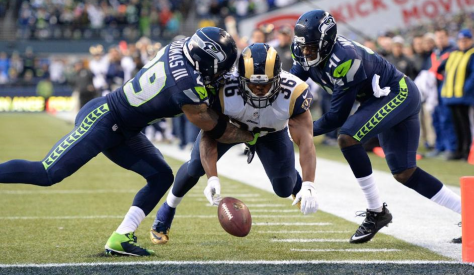 If you want to know the secret to Seattle’s uncommonly dominant defense, all you have to do is go back about 40 years to the Purple People Eaters.

Before the Seahawks — led by the Legion of Boom — capped a three-year run as the No. 1 scoring defense Sunday, the last defense to accomplish that feat was the Minnesota Vikings, from 1969 to 1971. Led by one of the NFL’s legendary lines — Alan Page, Carl Eller, Leonard Marshall and Gary Larsen — they were known as the Purple People Eaters.

It might not surprise you to learn that those Vikings were coached by Pete Carroll’s mentor, future Hall of Famer Bud Grant. (To add to the historical symmetry, Grant’s D-line coach was Jack Patera, who later became Seattle’s first coach. And Eller finished his career with Patera’s Hawks in 1979.)

Carroll often refers to lessons he learned from Grant, who coached the Vikings from 1967 to 1985 and hired Carroll to teach his defensive backs in his final season.

Carroll referred to Grant again Sunday after the Seattle defense shut down yet another offense, leading a 20-6 win over the St. Louis Rams that cemented Seattle’s third straight title as the league’s No. 1 scoring defense.

One of the defense’s great plays Sunday was Jordan Hill’s scoop interception, and Carroll said that was no accident: “It’s just something we always preach. We throw the ball every day. Everybody has to catch the football every day in practice. I give that one totally to Bud Grant. That was Coach Grant’s deal, and I just swiped it.”

Just like the Seahawks — who have allowed just 39 points over the past six games — have become the first team since Grant’s Vikings to swipe the No. 1 title in scoring defense for three straight years.

“I think that’s frickin’ awesome. That’s a big-time accomplishment,” Carroll said. “To lead this league for two straight years in yardage and points, that’s a big, big deal. That’s the players. It’s the same guys out there. … There’s a bunch of knuckleheads in that group and they’ve figured out a way to play together in really historic fashion.”