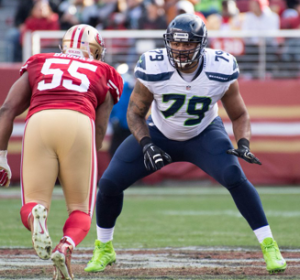 Why did the Seahawks let Garry Gilliam go to the 49ers?

It’s a question some fans are asking, but the answer is simple: They didn’t want to guarantee $1.4 million to a guy they probably were going to ask to take a pay cut this summer anyway.

It was a 50-50 proposition that the Seahawks were even going to tender Gilliam back in March, but they gave him the low tender, $1.8 million, because they were short on bodies.

When they were able to add Luke Joeckel and Oday Aboushi in free agency, it gave them the flexibility to bump Germain Ifedi to right tackle. With the 2016 first-round pick expected to win that job, Gilliam, the former undrafted player who struggled in 2016, looked destined for a backup role.

As they have done with many previous restricted free agents, the Hawks then would have asked Gilliam to take a pay reduction from the $1.8 million tender. So, when the 49ers came over the top with a $2.2 million deal that guaranteed almost the entire amount of the RFA tender, it was a pretty simple decision for the Hawks.

END_OF_DOCUMENT_TOKEN_TO_BE_REPLACED

Pete Carroll knows his team has to keep trying to run the ball if it is going to keep winning. That was true vs. the Rams and certainly will apply in the playoffs.

The question: Will the offensive line get it back together or will Seattle have to win the way it did against Los Angeles?

The Seahawks had rolled up 655 rushing yards, at a 6.1 average, over four games heading into last Thursday, leading to some confidence that they might be able to buck their trend of poor performances against the Rams.

But they instead conjured one of their worst rushing games of the season, averaging a season-low 2.4 yards per carry. It was their sixth game under 3.0 this season — the most in Carroll’s seven seasons. It also was the worst rushing performance by that metric since Russell Wilson became QB.

END_OF_DOCUMENT_TOKEN_TO_BE_REPLACED

It’s no wonder John Schneider and Pete Carroll had developed an aversion toward drafting offensive linemen in the first round: They always get hurt.

After going back-to-back with first-round linemen in 2010-11, it took them five years to try again. Now it might be another five years before they do it again.

We can only hope Germain Ifedi’s high ankle sprain, which is expected to sideline him for at least three weeks, will not send him down the same injury path traveled by Russell Okung and James Carpenter.

END_OF_DOCUMENT_TOKEN_TO_BE_REPLACED

The addition of Jahri Evans to Seattle’s line is both exciting and confusing — exciting because the Hawks are adding a highly decorated veteran and confusing because Evans plays the position where the Seahawks appear most set.

Mark Glowinski and Germain Ifedi have received glowing praise from Tom Cable and Pete Carroll, leading everyone to believe they will be starting at the guard spots when the season starts. Along with Garry Gilliam at left tackle, those positions looked like the only ones where the Hawks had figured it out.

But the addition of Evans, a six-time Pro Bowl right guard, certainly bolsters the competition there — assuming he is healthy and able to play at age 33.

“He’s not been told he’s the starter or anything like that,” Pete Carroll said. “He’s been brought in to compete; (we’re) hoping he’ll add to the level of our play.

END_OF_DOCUMENT_TOKEN_TO_BE_REPLACED

Everyone knows the offensive line is the biggest concern about this otherwise Super Bowl-ready Seahawks team, so it’s no surprise to hear Tom Cable say we are a long way from knowing how that unit is going to shape up.

After Day 4 of camp on Tuesday, the assistant head coach said he was pleasantly surprised at the retention of the spring lessons by the entire unit. But he also made it clear they are just getting going and there is a ton of work to be done as they look for new starters at all five positions.

END_OF_DOCUMENT_TOKEN_TO_BE_REPLACED

The Seahawks are expecting to compete for a second Super Bowl title this year, and they’re planning to do it with a completely revamped offensive line.

That scares a lot of fans who view the line as the one thing that could keep this team from winning it all — kind of like it did last year.

But, anyone who thinks they can’t overcome that concern probably forgot what happened in 2013.

END_OF_DOCUMENT_TOKEN_TO_BE_REPLACED

The Seahawks lost seven games last season, and most of those losses occurred because their offensive line got pushed around.

The Rams and Panthers especially dominated Seattle with their great defensive fronts — the Rams’ Aaron Donald, Michael Brockers, Robert Quinn and William Hayes; the Panthers’ Kawann Short, Star Lotulelei, Kony Ealy and Charles Johnson. Those crews handed Seattle four losses, including the one that knocked the Hawks out of the playoffs.

That’s all you really need to know to understand why they drafted 6-foot-6, 324-pound tackle Germain Ifedi in the first round, 6-4, 314-pound guard Rees Odhiambo in the third and 6-2, 299-pound center Joey Hunt in the sixth. They are all smart, strong and athletic — and it sounds like the Seahawks think they all have a chance to start, now or later.

END_OF_DOCUMENT_TOKEN_TO_BE_REPLACED

New lineman Bradley Sowell posted an Instagram picture of some of Seattle’s linemen practicing with Russell Wilson and company at USC.

From left to right: J’Marcus Webb, Mark Glowinski, Kristjan Sokoli, Will Pericak, Sowell. Webb and Glowinski are the only ones penciled in as starters right now.

DRAFT COUNTDOWN: 5 weeks. Every Thursday until the draft, we look at draft-related topics involving the Seahawks.

As positively as they try to spin it, it is clear Pete Carroll and John Schneider are not finished with their offensive line.

Carroll said Garry Gilliam can handle left tackle, Justin Britt will improve at left guard, Mark Glowinski is ready to start at right guard and J’Marcus Webb can be better at right tackle for them than he has been for other teams.

Carroll said Gilliam is “an athlete who is really equipped to play” left tackle, Glowinski is “a natural guard” who should “be a big factor” and Britt “is just going to continue grow as a guard.”

“We think those guards give us a really secure spot with big upside,” he said.

But there’s no way the Seahawks are going to training camp with just these guys and center Patrick Lewis. Even on the off chance that they do not add a veteran before the draft next month, they certainly are going to add at least a couple linemen during the draft.

END_OF_DOCUMENT_TOKEN_TO_BE_REPLACED

Marshawn Lynch is back with the Seahawks and will practice Wednesday with an eye toward playing in Minnesota.

In other personnel updates, Pete Carroll said the Hawks could get back almost everyone who missed the last game or two — Kam Chancellor, Russell Okung, J.R. Sweezy, Luke Willson.

The temperature is expected to be in the single digits. That would be the Seahawks’ coldest game ever.

Carroll said the Super Bowl (i.e., his mistake) lingered in players’ minds for too long this season.

Carroll also shared the story of his vision to Win Forever: It started in Buffalo, where he won his first game as a coach.