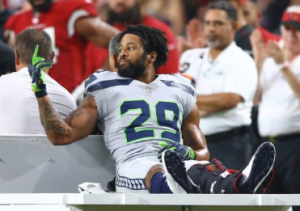 When Earl Thomas gave his one-finger salute to John Schneider (who else would he be targeting?) as the safety was being carted off the field Sunday in Arizona, he was just pointing out the general manager’s latest error.

Earlier this year, we detailed many of the mistakes Schneider has made since his magical (lucky?) draft run from 2010 to 2012. It has merely continued this year, with the Thomas debacle now officially another black eye for Schneider and the Rashaad Penny pick looking every bit the waste it appeared in April.

We are on the record as saying Schneider needed to re-sign Thomas or just take a second-rounder for him. Thomas publicly backed either play, too, and his “you’re the one” salute to Schneider (who had to be his specific target on the sideline) as he was carted off with a broken leg was kind of an exclamation point on Schneider’s failure there.

Dallas reportedly had offered a second-round pick during training camp, but Schneider had held firm on getting more. Then an NFL.com report Monday indicated Schneider finally had come off his price and was ready to deal Thomas to Kansas City for a second-rounder. Per the report, that deal might not have been consummated for another week or two (the deadline is Oct. 30), but Schneider waited way too long to lower his price.

It’s the same mistake he made with Richard Sherman in 2017, refusing to lower his demand and then watching Sherman suffer a major injury and lose any trade value. Schneider then simply dumped the cantankerous Sherman and his big salary — getting nothing in return. The GM should have taken the 2 — or even Jarvis Landry — when he had the chance. Poor business move.

And now he has done the same thing with Thomas, failing to maximize his return for the safety because he was too stubborn for too long. Thomas now will leave in free agency next year, and the best the Seahawks will get is a possible third-round comp pick in 2020. If his broken leg diminishes his market value, he might merit only a fourth-rounder. And, if Schneider does as he did this year and adds more UFAs than he loses, Thomas will not bring any return at all. It’s just more bad business by the GM.

As for the raging debate about Thomas’ “No. 1” salute, of course it was poor form. Thomas chose to return to play (he wanted his $500,000 weekly salary), so he cannot blame anyone for his injury. But we completely agree with Thomas that he should have been re-signed or traded long ago.

As for Penny, the first-round pick has played second/third string all season. In Arizona, he ran behind Mike Davis, who scored twice and recorded Seattle’s second straight 100-yard rushing day by a tailback.

Pete Carroll explained the decision: “I talked it over with Schotty (Brian Schottenheimer) about who we thought would handle it the best and would be the most comfortable. Mike’s played more and he’s been around and started games and all that. We just thought we’d go that way and keep Rashaad kind of in the role that we had projected going into the game, where he would come in off the bench and fill in and do some stuff, and we would see how the game would go.”

Penny ran well in his limited tries — 49 yards on nine rushes — but it seems clear the first-round pick will remain a backup runner while now returning kicks (he ran back three for 65 yards at Arizona).

As everyone except Schneider and Carroll knows, Penny was a big reach in the first round — and it has been confirmed by the fact that he is a mere role player instead of the starter. Yet another poor decision by Schneider, who has made plenty of them the last few years.