Russell Wilson picked a bad time to play like a rookie — or a second-year QB going against Arizona.

Wilson played one of the worst games of his career, right down there with his clunker vs. the Cardinals in December 2013, and the Hawks fell out of the No. 2 seed in the NFC with their 38-10 loss in Green Bay. It was the worst loss in the Wilson era — Seattle hadn’t been blown out like that since a 41-7 defeat to the New York Giants in 2010.

In many ways, his five-interception game was a carbon copy of the 2014 NFC title game, in which Wilson threw four picks and his receivers failed to catch the ball and created turnovers. The difference this time: Seattle’s defense did not bail out Wilson and his receivers and Wilson did not shake it off and rally his team to a fantastic comeback.

The only good thing about this one: The Super Bowl was not on the line this time. But the Hawks lost their grip on the No. 2 seed, taken over by Detroit for now.

Aside from the lack of a pass rush — another troubling trend over the past three games — this game falls squarely on Wilson’s head.

He single-handedly accounted for minus-21 points in the first half. He missed Doug Baldwin and Jimmy Graham for open touchdowns and threw a pick that set up Aaron Rodgers, who played as great for the Packers as Wilson played poorly for Seattle.

Take away Wilson’s huge mistakes in that first half and the score probably would have been 14-14 at halftime. If he hadn’t thrown a pick trying to force a TD to Jermaine Kearse early in the third quarter, the Hawks would have had at least a field goal from the Green Bay 20.

Even if Baldwin still had tipped a ball for an interception that set up Rodgers & Co. for another TD, that would have made it just 21-17 instead of 28-3. Seattle would not have gone for it at its 39 with 12 minutes left, giving the Packers an easy field goal. The only TD the Hawks actually scored would have given them the lead again, 24-21, with about eight minutes left — and it would have been a fantastic finish the rest of the way.

Wilson has eight career games with passer ratings under 50, but this one and a 17-10 home loss vs. Arizona in 2013 are the only ones that have occurred in December — and the only ones where his poor play pretty directly determined the outcome.

His worst-rated games came against San Francisco’s hard-charging top-five defense in a 13-6 loss his rookie season and the 14-5 loss to Tampa Bay two weeks ago, when he was under siege all game and got jittery from the start. 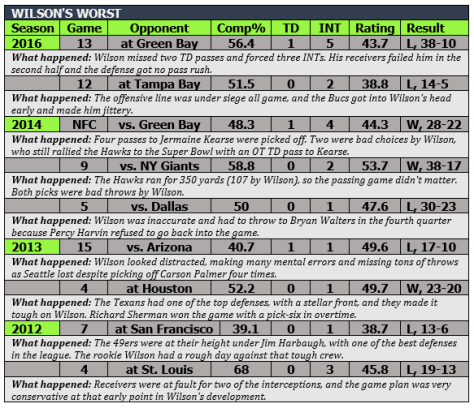 Even his first stinker against Green Bay in the 2014 NFC title game was not this bad — Kearse was responsible for two of his four interceptions (all on throws to Kearse) and several other drops made his day seem worse than it really was.

This day, like Arizona, was just as bad as it seemed. And, like that game, it will make things tougher on the Hawks in the final weeks.

That Arizona loss in 2013 sent the Hawks (12-3) into Week 17 needing to beat the Rams to win the NFC West. They pulled it off and claimed the top seed in the NFC as well.

They won’t get the top seed this year, though, and they just let Detroit take hold of the No. 2 seed for now. If they want it back and want to avoid playing in the wild-card round and then hitting the road, where they are 0-4-1 in the NFC, Wilson can’t throw out any more clunkers.

2 thoughts on “This one was all on Wilson”