A day before free agency, the Seahawks took care of several roster questions — adding two cornerbacks and keeping two of their own pending free agents — while also learning James Carpenter probably will join Byron Maxwell on the way out of town.

The additions of 30-year-old cornerbacks Will Blackmon and Cary Williams address the major depth problem the Hawks face at that position — Maxwell leaving, Jeremy Lane dealing with a broken wrist and torn ACL, Richard Sherman healing up a torn ligament in his elbow and Tharold Simon apparently recovering from shoulder surgery.

END_OF_DOCUMENT_TOKEN_TO_BE_REPLACED

With Byron Maxwell headed to Philadelphia, the Seahawks are looking around for cornerbacks.

They could end up basically swapping cornerbacks with the Eagles — already having visited with former Philly corner Cary Williams. They could sign a Green Bay cornerback. And they could bring back an old friend.

That latter is not a reference to Walter Thurmond, whom many want the Hawks to re-sign. It is a takeaway from a Boston Herald report that the Patriots might let Brandon Browner go. They are allowing him to “explore his value around the league” before a $2 million roster bonus is due Tuesday.

Would the Seahawks want the 30-year-old corner back? They would have to be comfortable with the idea that he is in the league’s drug program and is still among the most penalized players in the NFL.

We’d pass, but it’s worth mentioning.

END_OF_DOCUMENT_TOKEN_TO_BE_REPLACED 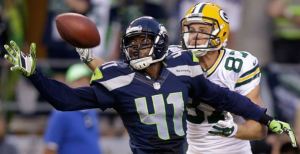 Byron Maxwell owes Pete Carroll and Kris Richard a big vacation. Without those guys, he never would have become a $10 million player.

His looming deal with the Eagles, reportedly $60 million over six years and guaranteeing $25 million, is not far off the deal Richard Sherman signed last year: five years, $57.4 million with $40 million guaranteed. That’s the kind of overpayment free agency breeds.

The Hawks apparently tried to retain him, surprisingly offering as much as $8 million a year, but what chance did they have at that rate?

Seahawks fans are ruing the loss, but why? The Pete Carroll Secondary School made Maxwell, and they will make another guy just like him. Carroll is the key to Seattle’s secondary. Maxwell was just a cog.