Larry Stone of The Seattle Times relates Richard Sherman’s thoughts of the Chargers and Broncos games.

Did the Chargers reveal a way to pick on Sherman?

Cliff Avril and Michael Bennett (that’s two T’s, guys) have been playing great — even if the rest of the defense has not.

Avril and Bennett talk about how the Seahawks like to play their base defense, with minimal blitzing, per Jayson Jenks of the Times.

Bob Condotta of the Times reminds everyone of Robert Turbin’s tragic family history, which Turbin says “plays into my motivation.”

Condotta asks whether the off-field legal problems of Ray Rice and Adrian Peterson have “diminished your desire to watch NFL games.” Not sure why they would unless you are a Vikings fan who is bummed that your team is now much worse, but 25 percent of people (probably new fans) apparently think those guys reflect an entire league. 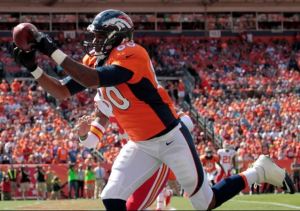 The Denver Broncos who come to Seattle with revenge on their minds this weekend are not exactly the same Broncos the Seahawks demolished in the Super Bowl.

Sure, John Fox is still their coach — one of the best in the league — and they still have the legendary Peyton Manning at quarterback. But so many other things have changed.

On offense, Eric Decker and Knowshon Moreno left in free agency — replaced by free-agent receiver Emmanuel Sanders and second-year running back Monte Ball. Left tackle Ryan Clady is back after missing most of 2013 with a foot injury. And top slot receiver Wes Welker returned this week after his suspension was overturned thanks to the new drug policies ratified by the union and the league.

Even with the changes, Manning has been typically masterful in Denver’s 2-0 start, completing 69 percent of his passes and throwing for six touchdowns.

“They’re terrific,” coach Pete Carroll said. “Their whole system, their function, their tempo, their style of offense, the intricacies, the concepts of route running and all that. Really, it’s impeccable. They give us every challenge that you could ever want, and they’re off to a great start.”