In the wake of a horrific upset loss to Tennessee and with a tough four-game stretch looming, Shane Waldron’s first test has arrived quite quickly.

If the Seahawks are going to stay in the race for home field, Waldron is going to have to rebound from a poor second game by scheming more like he did in the opener, and he is going to need to get Russell Wilson to follow his lead.

It all starts in Minnesota on Sunday.

Waldron did not plan well for the Titans, and he let Wilson revert to his overly aggressive deep-ball ways when a smarter approach was needed.

After some early success throwing long, Wilson continually looked deep – even on third-and-short and in overtime – and it hurt Seattle, which had the ball half as long as the Titans (42 to 22 minutes) and thus faded on defense against Derrick Henry.

Wilson leads the NFL in deep passes, but we all learned in 2020 – and again against Tennessee — that is no guarantee of victory. There are better, more reliable ways to win.

Tyler Lockett, who is enjoying a historic start to the season, knows Wilson gets addicted to the deep ball.

“I think sometimes we can get caught up. We had so many explosive plays. It’s like once you start seeing explosive plays happening, you want to keep doing it,” said Lockett, who connected with Wilson on plays of 51 and 63 yards (the latter a touchdown) and finished with 178 yards vs. Tennessee after notching 100 against Indianapolis.

“Eventually they ended up taking away those explosive plays and they wanted us to be able to play short.”

But Waldron did not scheme well enough for that to work, and Wilson just kept going deep. Like the rest of us, Pete Carroll didn’t like it when that led to another three-and-out in overtime.

“We didn’t function as well down the stretch,” Carroll said. “That’s something I was really disappointed with.

“(Wilson) was really successful at being really aggressive during the game. He was trying to just keep going, keep pushing it. I wish he would have been able to keep us moving with a couple checkdowns late in the game, in the overtime in particular.”

But Wilson prefers faith over logic: “I’m not going to change my mindset. I know how to win a lot of those games. We’ve done it before. You’re not going to win every single one of them, but you believe you can. I think that’s the key to our football team, always believing that you can.”

Belief is great, but it has to be accompanied by a sound plan. And the Hawks did not have that for most of that game. Waldron for some reason went away from the great deceptive concepts he showed in Week 1 and put together a very vanilla plan that looked a lot like the Seahawks always have with Wilson.

The Vikings have given up a bunch of deep balls in the first two games, but hopefully Waldron won’t fall into the trap again of letting Wilson just chuck it all game. He needs to mix it up as he did in Week 1. It was a balanced attack that still featured deep throws but also allowed for spreading the ball around more and kept the running game open.

Waldron and Wilson have to do better if the Hawks are going to emerge above .500 after this tough four-game stretch that starts in Minnesota, goes to San Francisco, returns them to Seattle to face the Rams and then takes them to Pittsburgh. The last three teams are a combined 5-1 right now.

At this point, the best the Hawks seem capable of is a split that lands them at 3-3 as they come back home for games against New Orleans and Jacksonville, before another tough four-game run (at Green Bay, vs. Arizona, at Washington, vs. the 49ers).

It’s Waldron’s challenge to make sure those trends continue.

One thought on “After Week 2 failure, Waldron faces big test” 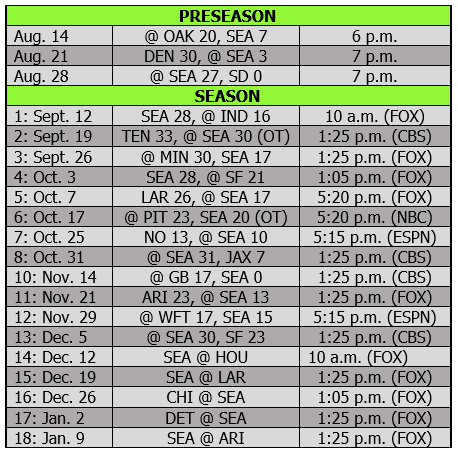