The Seahawks’ utterly avoidable 37-34 overtime loss in Arizona was a reminder that this team plays on thin margins and cannot afford three interceptions from its quarterback if it has designs of going very far in the playoffs.

Russell Wilson’s three turnovers, plus a big gaffe by Benson Mayowa, ruined Tyler Lockett’s best NFL game and made moot an unbelievable touchdown-saving tackle by DK Metcalf as Arizona made the winning 48-yard field goal with 20 seconds left in overtime. That knocked Seattle from its undefeated perch and also handed the Hawks their first loss in Arizona since Wilson’s rookie year (they had been 6-0-1).

Wilson made some stellar throws to Lockett, especially two drop-it-in-the-bucket touchdown passes. But Wilson also cost his team 10 points with two end-zone interceptions and then ended any chance of a win with his overtime interception. It was the first time he had thrown three picks since a 30-24 loss in Jacksonville in December 2017.

Wilson took full blame for losing in Arizona: “I thought we played a great game except for those three plays. And those are my fault honestly. … I have to be better, which I’m looking forward to. I wish we could play tomorrow.”

Frankly, Wilson has not played great in either of the past two games. He managed to pull out the win over Minnesota in Week 5 with two fourth-down passes to Metcalf. But he held the ball a lot in that game, looking for deep passes against a Minnesota zone that was not going to allow them, and the offense struggled. Put some of that on Brian Schottenheimer, too, for not using his tight ends more (something he remembered to do this week).

Wilson did the same in this game as well, though it led to a couple of big plays to Lockett – a 34-yarder on the first drive, which ended with a short TD pass to Lockett, and a 47-yard score that put Seattle up 27-14 late in the first half. Both were perfectly placed balls and great catches by Lockett. The offensive line gave Wilson good time for most of the game.

Wilson had the Hawks poised for 10 more points and just threw the ball up for grabs. The first one, a lazy goal-line lob to Chris Carson, ruined a chance to go up 20-7 in the second quarter. Budda Baker looked like he was going to take it back for a touchdown, but then Metcalf put forth one of the greatest touchdown-saving efforts you will ever see from a player, making up 10 yards of ground and catching Baker inside the 10 – after a 90-yard return.

The Hawks made Metcalf’s play count by stopping Kyler Murray on fourth down. And then Wilson and Carlos Hyde – in for an injured Chris Carson — took the Hawks 97 yards to go up 20-7, on a 28-yard run by Hyde. But it should have been 27-7 at that point.

The Hawks led 27-17 at halftime (it should have been 34-17) – which means they ended their 59-game streak of winning games they led by four or more at halftime. They scored only one touchdown through the next three periods.

They were up just 27-24 in the fourth quarter when Wilson ruined a field goal opportunity with another end-zone interception.

Quandre Diggs got the ball right back with his own interception, and Wilson finished a 45-yard drive with another drop in the bucket to Lockett, who dragged his feet in the back of the end zone. The refs ruled TD then changed their minds, so Pete Carroll challenged and it was turned back into a TD. It was reminiscent of Lockett’s TD catch last season against the Rams – another incredible play on a day full of them for the sixth-year star.

Lockett caught 15 passes for 200 yards and three scores, becoming only the third player since the 1970 merger to accomplish those feats. (Steve Largent did it for Seattle against Detroit’s strike replacements in 1987.) What a waste.

Seattle’s beleaguered defense gave up 10 straight points to Murray and the Cardinals to end the fourth quarter, as Schottenheimer got conservative (five runs) and the offense failed to convert a third-and-2 with under a minute left. The Cardinals drove 54 plays in the final 52 seconds and tied the game.

In overtime, Wilson had two chances to win the game, but rookie DeeJay Dallas (in for injured Travis Homer) could not keep blitzers off him and Wilson threw his third pick after Metcalf’s 48-yard TD on a short pass was called back due to holding on David Moore.

While Wilson bears the brunt for most of this loss, Mayowa helped cost the Hawks four points late with a massive mistake on a field goal by Arizona. He was called for a “leverage” penalty, and Arizona took the points off the board and ended up scoring a TD two plays later to cut the deficit to 34-31 with 2:28 left. That enabled the final score to be a field goal rather than a TD to force overtime.

The Seahawks simply cannot give up points like they did in this game. They don’t have the defense for it. They rely heavily on winning the turnover battle and getting key stops like the defense had after the Metcalf tackle.

Bobby Wagner admitted the defense was terrible again. It gave up 519 yards and 37 points and didn’t get enough stops. “We have to play better. … We can’t put the offenses in the situations that we put them. We are not where we want to be. At this point, it’s about deciding we want to improve as a defense.”

Desire won’t be enough. Not nearly.

It might help to get back Jamal Adams, but the fact is the Hawks’ lack of a pass rush – they had no sacks and no hits (other than a couple of run stops) on the jitterbuggy Murray – is going to be a problem all season. Blame John Schneider, who decided not to add any top pass rushers and instead spent a bunch of draft capital on Adams, who has missed three games so far.

The Hawks have a very small margin for victory, and they can’t afford to throw games away like they did in Arizona.

2 thoughts on “Wilson & Co. can’t give up points like that” 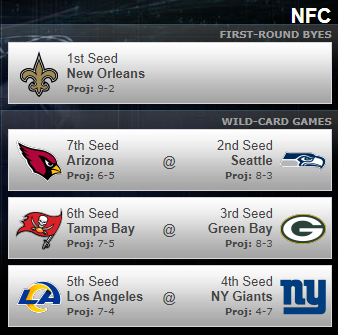 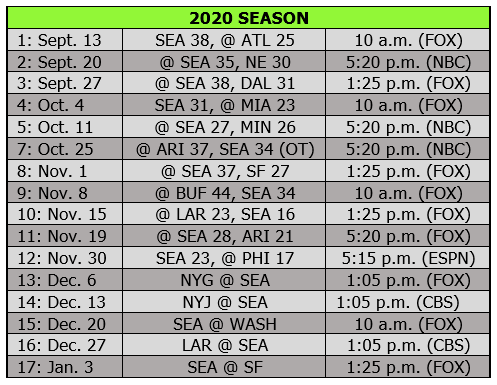