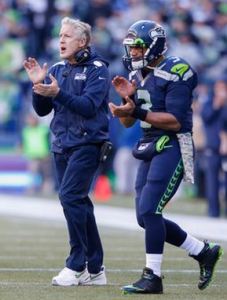 “Let Russ cook” has become an annoying mantra repeated by some fans the last couple of years.

It’s a nebulous decree. For some, it is a call for Seattle to just throw the ball 40 times a game. For the smarter ones, it is a more nuanced request for the Seahawks to let Russell Wilson stir the pot in his own special way, especially earlier in games.

At the Pro Bowl in February, Wilson said he was all in favor of the latter. He talked about going up-tempo more — something we have constantly called for in the first half, especially. He also apparently has discussed this with Pete Carroll.

Don’t get too excited, cooking fans, but it sounds like the coach might have listened, based on staff moves he made and a report that Seattle is indeed talking about letting Wilson work up some two-minute meals.

He said he would like to have “the freedom of just going after it and just scoring as many points (as possible), you know?”

At the Combine, Carroll said, “We’ve been talking about that for years. We’ve been in and out of tempo throughout, and so you’ll see what happens.”

A month later, we saw what happened: The Hawks announced changes to their coaching staff, with Dave Canales now coordinating the passing game and Brennan Carroll (Pete’s son) the running game. The run-pass split coordinators hark back to co-coordinators Tom Cable and Darrell Bevell, except this time the Hawks have an overall coordinator, Brian Schottenheimer, and a veteran quarterback who is bugging them to pick up the pace.

Those moves reportedly were made because they are indeed considering running up-tempo offense more often. It certainly could help them in road games, where they often fall behind in the first half because they have no urgency (they were the third-slowest offense in first-half pace in 2019).

Whether the Hawks go up-tempo more or not, Schottenheimer and Canales certainly should be planning how to use their talented tight ends in lethal combinations. Carroll has referenced that a couple of times, talking about the “really important” addition of Greg Olsen and the “unique” ability of Jacob Hollister. Whenever Will Dissly returns healthy, the Hawks could have a stellar trio that could create all kinds of problems for defenses. It’s something to hope for.

The Hawks also need to use more misdirection to help Wilson, especially in games where he is under pressure a lot. The playoff loss in Green Bay was such a classic example of that. Their first half was horrific. Playing up-tempo and using misdirection would have helped the Hawks avoid a 21-3 deficit and possibly win that game. It sounds like they might realize that.

Of course, we have heard this up-tempo talk before. So, when Carroll says, “There’s a lot of really cool things happening on offense,” we can only hope he really means it this time.

If he doesn’t, the “Let Russ cook” cannibals will keep calling for his head.