As good as Pete Carroll’s Seahawks have been at home in September (15-0 after the ugly win over Cincinnati last week), they have been inversely successful on the road.

If the Seahawks are going to end a five-year losing streak in road openers and win for the first time since their championship season, they are going to need to do well early in the 10 a.m. PT start in Pittsburgh.

The common theme in the opening road losses in most of the past five years has been terrible third-down rate and the accompanying lack of possession. The variables have been sacks, turnovers, red-zone failures and penalties.

Last year in Denver, Russell Wilson was sacked six times (many his fault), threw two interceptions and converted just 2 of 12 third downs as Seattle was out-owned 35 minutes to 25. Denver won 27-24.

In 2015, they lost a shootout to the Rams, 34-31 in overtime. They actually held the edge in almost every category, but Wilson was sacked six times and the defense gave up the tying TD with 53 seconds left and lost on a field goal in OT.

Third downs have long been a problem for Carroll’s offenses — mainly because the Hawks often put themselves in a deep hole after wasting their first and second downs.

So that should be a major focus as they go to Pittsburgh — a lesson they should have learned after the Denver debacle last season. They need to target receivers on first downs, throw quickly, use misdirection, move Wilson as needed and vary their run-pass mix.

As former Steelers coach Bill Cowher told KJR, the Seahawks are made to play from ahead (something they rarely do), so they need to take an early lead to allow their running game and pass rush to control the game.

Shaquill Griffin (who is almost 20 pounds lighter this season) said the Seattle defense played more base defense and off coverage than usual in Week 1 because they didn’t know what Cincy would do. This week, he says to expect the defense to go back to its normal schemes against Ben Roethlisberger and a Steelers team that has done the same thing for years now. We still expect Carroll to play his linebackers a lot, especially with the nickel spot still not ironed out (Jamar Taylor is back and likely to play there).

The safeties need to play a lot better. It looks like Lano Hill will start for Tedric Thompson, who had a rough opener and then sat out practice this week with a hamstring injury. Bradley McDougald also needs to step it up after a tough opener; he made a huge gaffe on John Ross’ first TD.

Quinton Jefferson had a monster first game: six tackles, two sacks, two tackles for loss, three QB hits and two batted passes. Playing back home in Pennsylvania, can he trump that? The Hawks will be without Poona Ford, it appears, but they might get Ziggy Ansah and L.J. Collier — that would lead us to think all three linebackers will play a lot so they can focus on helping against the run. 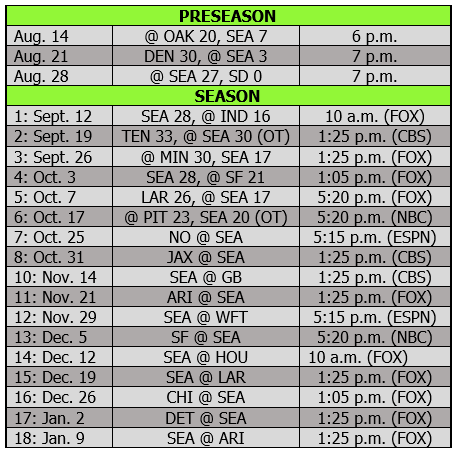