Guaranteed money is the key to any contract, and it’s the most important thing to Russell Wilson in his new deal. It also figures to be the thing that could delay an agreement.

When he signed his first extension in 2015, Wilson became the No. 2 NFL player in average salary ($21.9 million), right behind Aaron Rodgers ($22 million). But he still trailed a handful of quarterbacks in guaranteed money.

With a dozen QBs having gotten new deals since Wilson was paid, he now ranks 15th in guaranteed part of the total deal (36.2 percent) and 17th in guaranteed money per year ($7.9 million) — according to figures compiled by OverTheCap.com. 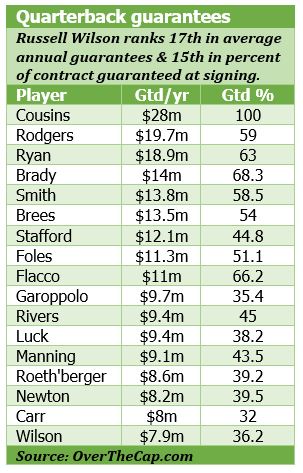 Wilson would love a fully guaranteed deal that averages $35 million a year, but that would blow away those top QB deals and John Schneider surely prefers not to do it.

It should be an easy deal to do, but a source told The Seattle Times on Friday: “There has been very little progress made between the two sides.’’

The Seahawks don’t like to do full guarantees past one year, and NFL contract experts Joel Corry and Andrew Brandt think that could be a holdup in these negotiations.

“I think Seattle’s going to hold to their structure and it’s not going to get done by April 15,” Brandt told 710 ESPN. “Does that mean we’re in a rotating franchise tag thing for the next three years? I don’t know; I think it’s way too early to talk about that. And does that mean nothing can’t get done before July, August, September, October? No. And of course Russell’s not going to hold out. So I just think this structure issue is going to be something the Seahawks hold tight to as long as they can, and I think that runs at least through April 15.”