“We’re going to be in every deal. … You don’t want to miss any opportunity.” — John Schneider

John Schneider is using every element of the Combine to try to improve his Seahawks this weekend. That includes soliciting offers from teams on some of his veteran stars.

“Part of our challenge right now … is sustaining our level of success that we’ve had,” Schneider said. “And we are just open to anything.”

The Seahawks are shopping Michael Bennett, and some expect Earl Thomas to be traded as well (Schneider met with his reps Thursday night).

Richard Sherman is on the block, too. Most don’t think the corner has any value as he recovers from two Achilles surgeries, but Dr. David Chao (@ProFootballDoc) wrote, “This (second surgery) is not a setback that decreases Sherman’s value. If anything, it increases it, as it should diminish the chance of an Achilles rupture on the other side.”

Asked about Bennett, Schneider said, “I think it would blow people’s minds the things that we talk about. It’s just part of the process. Is (trading Bennett) something that’s completely real or not real? I don’t know yet.

“It’s just people talking,” Schneider said. “People ask us about players; we ask other teams about their players.” (Wonder if Schneider tried very hard to acquire Robert Quinn from the Rams.)

As for Thomas, the GM said, “I’ve talked to his representatives in the meetings we’ve had down here. We’re meeting with all our guys here, as well as other teams, trying to figure out where everybody is. We have a huge map, and we’re just trying to put it all together.” 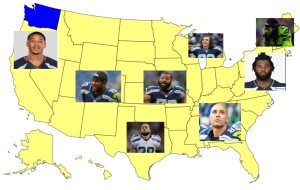 Schneider called it a “constant puzzle. You’re trying to put stuff together all the time. It’s a big challenge. … We’re going to … recalibrate after studying this whole weekend, listen to everything we’re listening to, sit down and make some sound decisions. Pete and I have a lot to discuss.”