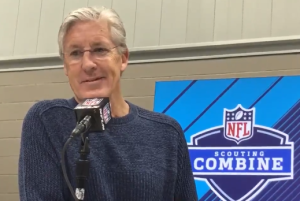 By the time Seattle’s prospective new NHL team likely plays its first game in 2020, Pete Carroll should be a month into his third contract with the Seahawks.

Carroll, 66, has just two years left on his current deal, but it’s obvious he plans to coach beyond that. He reportedly told Paul Allen after the season that he is “all in” on flipping the Seahawks’ direction back toward the Super Bowl.

He wouldn’t have completely revamped the top of his coaching staff if he thought he was going to retire after the 2019 season. He wouldn’t have hired Brian Schottenheimer, Mike Solari and Ken Norton Jr. with the promise of only two years — “Hey, guys, come up to Seattle for a cup of coffee before you get kicked to the curb when I retire in 2020.”

No way. He knows he wants to keep going, and that’s why he switched up his staff. He needed new blood to keep his own boiling.

“I just felt like it was time to shake up some stuff just so we could get new outlooks,” Carroll told 710 ESPN’s John Clayton. “I want to make sure that I’m continuing to feel challenged by what we’re doing and how we’re going about it. I want to make sure to continue to challenge the players, as well as the other coaches. I think every now and then it’s just important.

“I love the way the energy is around our building right now,” Carroll said. “I love the energy that I’m feeling about the growth and the challenge to make the decisions.”

Earlier at the Combine, he said, “It was difficult to make those choices, because the guys that left we had done so much together and worked together in great fashion. But I just felt it was time. It really comes back to competing and just trying to find a way to get a little bit better. That’s why we made those choices.”

Carroll has long said his goal was to “do it better than it’s ever been done” — to “win forever.” He had his chance in Super Bowl XLIX and blew it — and he knows he can’t let that horrendous failure define his career (and yes, it overshadows the Super Bowl XLVIII win).

Over the ensuing three seasons, Carroll let his club stagnate and dwindle into near irrelevance. He really is a couple of years late on these changes, but at least he finally figured it out.

So now we begin Pete Carroll 2.0, with fresh ideas and attitudes serving to re-energize Carroll and the XLIX remnants and get the most out of young players who have underachieved the past couple of years.

“I’m really excited about the (coaches) that are here and how it’s working out so far,” Carroll said. “We are seeing the new energy. I am energized by it. The whole group is.”

And that’s why you can probably count on another five-year playoff run, with Carroll leading the way into his 70s.