The Seahawks have been one of the worst first-half offenses in the league this season, ranking 25th with 8.5 points. That’s nine points less than the Rams, who play in Seattle today in what is almost a must-win for the Seahawks.

A big reason the Hawks have failed so miserably in the first half is their inability to do anything on first down.

For full games, they are the second-worst rushing team in the NFL on first down, and Russell Wilson is having the worst season of his six-year career for first-down passing.

The loss to Jacksonville last week exemplified the issues they have had there, while also providing a glimmer of hope that they might be close to fixing the problem.

Their first-down rushing success this season is just 37 percent, behind a 3.4-yard average, and their running backs are at a league-low 32 percent. 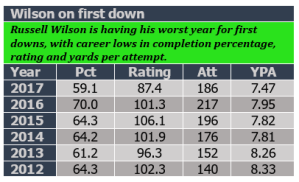 That partly explains why Wilson’s first-down completion percentage is 59.1, the worst of his career (as is his 87.4 rating). The percentage is the worst among the QBs leading the top 12 Super Bowl contenders (Philly’s Carson Wentz was at 59.8 and the rest are at least 62), and Wilson’s first-down rating is second-worst in that group behind Pittsburgh’s Ben Roethlisberger (80.2).

It’s quite a flip from last year, when Wilson hit a career-high 70 percent on 217 first-down passes. Of course, the Seahawks also were successful on 46 percent of their first-down runs in 2016, averaging 4.2 yards. Those numbers helped them average 12.4 points in the first half, which ranked 10th in the league.

Wilson’s Seahawks are 48-7 when leading at halftime, so you’d think they would want to start stronger to get that lead. But they have led at halftime of just four games this season (3-1 record).

The lack of a running game has put more pressure on Wilson, who has come out tight in many games — throwing high or low or to the wrong receiver. He also has thrown five of his career-worst 11 interceptions on first down.

Because the Hawks haven’t been able to run it, he has thrown more passes on first down than any of those contending QBs — he’s on pace for a career-high 224 first-down throws. Meanwhile, the Hawks are on pace for 230 first-down carries, which would be 35 less than their average from 2012 to 2015, when they were one of the league’s elite rushing offenses.

The Hawks (and everyone, really) always talk about the importance of converting third downs. But that’s a procrastinator’s view: “Hey, let’s screw around for two downs and then try to do it all at the end.” Here’s an original thought: Why not get as much as you can on first down and make those thirds easier to convert?

That’s not how Seattle works, though. Last week in Jacksonville, for example, Wilson and company whiffed on half their first-down plays, gaining zero yards or fewer. Wilson was just 5 of 11 for 81 yards; take away a 61-yard TD pass and he was just 4 of 10 for 20 yards. It was a typical game of first-down failures for Wilson and company.

That game provided a positive sign though: The Seahawks were successful on 50 percent of their first-down runs, way up from their season average. Mike Davis burst out for four straight big gains on one drive (21, 13, 10 and five yards). Seattle finished with 78 yards on 14 first-down carries, offering a stout 5.6 average.

“It’s really what we have been looking for — that continuity in the running game,” OC Darrell Bevell said. “It’s good to have the offensive line playing together another week. … Mike has done a really nice job at reading it and getting the ball in the spot and making the right cuts.”

Against the Rams today, they will need to repeat that. In a 16-10 win in L.A. in Week 5, Seattle gained just 22 yards on 13 first-down runs and hit 6 of 14 first-down passes for 36 yards, with a TD and two interceptions (one by Tanner McEvoy on a reverse pass).

Yeah, Seattle can win ugly like that. But it’s not sustainable deep into the playoffs.

Wilson is known for his strong finishes — he has an NFL-record 17 fourth-quarter TD passes this season. And the Seattle offense certainly has been much better in the second half — their first-down run success rate is 44 percent and their overall second-half rush average is a strong 4.6.

But, if the Seahawks have designs on winning the Super Bowl, they are going to have to beef up their first-half scoring. And it starts with playing a lot better on first downs.

Talking Hawks on the air