The Seahawks don’t often win shootouts — because their defense rarely lets them get into those situations.

So, it was a great sign Sunday that Russell Wilson put the team on his back and won a historic duel with stellar Houston rookie Deshaun Watson.

The Hawks are 5-2, tied with the surprising Rams atop the NFC West, with a direct win already. Seattle should win at least three of the next four (Washington, at Arizona, Atlanta, at San Francisco) before a tough four-game stretch (Philadelphia, at Jacksonville, L.A., at Dallas). Add the finale vs. Arizona, and the Hawks look poised for 10-11 wins — more if they can find a running game. 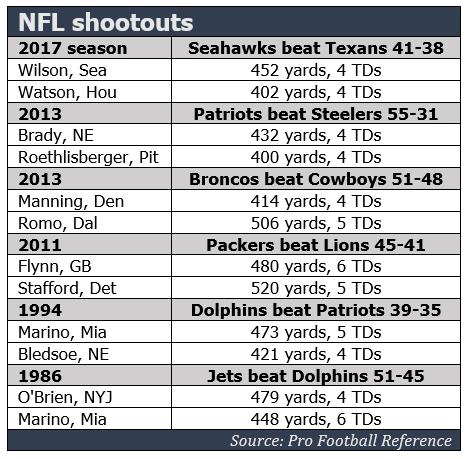 This win over Houston was unique in that Wilson and the offense outscored a prolific offense. It was only the sixth time in modern NFL history (since 1950) that two QBs each threw for 400 yards and four touchdowns in the same game.

Since 2012, when Wilson arrived, the Seahawks are 17-2 when scoring at least 30, 8-0 when hitting 40. The seven previous 40-pointers had been blowouts, by an average of 32 points. The Seattle defense just doesn’t have days like this — and the Hawks usually lose when it does.

This was only the second time since 2012 the Seattle defense gave up 500 yards and 30 points.

Carroll’s Hawks had been 1-19 when giving up 30 points — the win coming in that 2015 Pittsburgh game. They have typically not had the offense to overcome a poor defensive day.

DeAndre Hopkins (224 yards) is just the second 200-yard receiver in the Carroll era — Markus Wheaton went for 201 for Pittsburgh in that 2015 game. Hopkins had the second-best receiving day against Seattle ever. San Diego’s Wes Chandler caught 13 for 243 in a 49-35 loss to Seattle in 1985.

Watson is the third player to ever throw for 400 yards and four scores against Seattle. Dan Fouts (1985) and Ken O’Brien (1986) were the only other QBs to do it. This was the 10th 400-yard game ever vs. Seattle, fourth in the Carroll era. The last came from Ben Roethlisberger in that 39-30 win over Pittsburgh in 2015. Seattle had not given up a four-TD game to a QB since 2010, when three players did it. Watson was the 21st QB to ever do it vs. Seattle — Fouts and John Elway each did it three times.

It speaks to how great Watson played that the Hawks sacked him five times, picked him off three and returned one for a TD — and he still nearly beat them.

But, thanks to Wilson’s career-best 482 total yards (a team-record 452 passing) and four TDs, Watson was only the second-best QB.

The Seahawks are officially a passing team now. Wilson has hit 300 yards and three TDs three times this year. He also did it three times last year. Before that, he had done it just two other times. This was the first 300/3 game in which he had thrown an interception, but he redeemed himself with the winning 18-yard TD pass to Jimmy Graham with 21 seconds left.

Graham was the subject of pregame trade scuttlebutt — debunked by both Carroll and John Schneider. He had gotten off to a rough start this season, but he has now scored four times in the last three games — his best stretch in his three seasons with the Hawks. The Hawks have finally realized they should throw it to him in the red zone — even if they are not always successful. They targeted him three times and hit him for two scores.

The Hawks got a couple of monkeys off their backs, going 3 for 5 in the red zone (they had been under 42 percent there) and scoring a TD in the first quarter, which they had not done this season. They had been averaging 6.5 points in the first half, but Earl Thomas returned a pick 78 yards for a TD, atoning for allowing Fuller’s 59-yard score on the first drive, and Wilson hit Paul Richardson from 20 yards and 7 yards.

Richardson had the best game of his career — six catches for 105 yards and two TDs. He has five TD catches now in his contract year — he should end up with a nice offer from some team next offseason, if he stays healthy.

Richardson and Tyler Lockett each went over 100 yards — just the second time Wilson has had two 100-yard receivers (Doug Baldwin and Luke Willson did it in a 35-6 win over Arizona in 2014).

The Hawks still can’t run the ball. They ran for just three yards on 17 designed runs. Only Wilson’s 30 yards helped Seattle avoid setting a team record for rushing futility (4 yards in a 2009 blowout loss to Minnesota). The Hawks have been under 100 yards in four of their seven games, and they’re averaging about 70 yards per game if you take away Wilson’s 32.

Tanner McEvoy had a rough start to the season — dropped passes, threw an INT, ran into a punter. But, against Houston, he caught a 53-yard pass — his first catch of the season — and forced a fumble on a kick (Houston recovered). He also nearly blocked a punt. Those are the reasons the Hawks kept him over Kasen Williams.

The big injury concern is Thomas (hamstring), but two positives: (1) He doesn’t think it is major and (2) the Hawks have a great backup in Bradley McDougald.