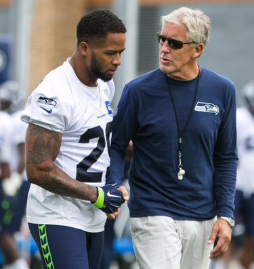 The Seahawks’ defense has put together an unprecedented run — becoming the first modern NFL team to go four straight years as the No. 1 scoring unit.

After Seattle shut down Arizona 36-6 in the 2015 season finale to clinch the top spot again, a beaming Pete Carroll said, “I don’t know if there is a record that I could be more proud of than to see our guys go for four straight years and lead the league in scoring defense. I think that is a remarkable accomplishment by a bunch of guys dedicated to the program and what we are doing.”

Carroll’s defense also has given up the fewest yards over the last three years, ranking first in the 2013 and 2014 Super Bowl years and second last season.

That’s a pretty darn good run of defense — and yet the Seahawks know they can become more consistent if they can cover their Achilles’ heel.

Because they have so many veterans on the unit now, the coaches apparently are finally planning to address the soft underbelly of their defense, which has been prone to giving up big chunks of yards and too many touchdowns to tight ends, running backs and slot receivers.

Their plan to fix that issue figures to be one of the big stories of training camp, which begins Saturday.

Their inability to stop short passing games caused them to start slowly in 2014 and 2015, contributed to their Super Bowl XLIX loss and was a big reason they fell so short of claiming the NFC’s top playoff seed last season. (Bucky Brooks broke down the shortcoming after Seattle’s 2-4 start last season.)

The hole in Carroll’s Cover-1/Cover-3 scheme has been there forever, and the coach often has dismissed it. He preaches limiting the big play — the Seahawks led the NFL in toxic differential in 2013 and 2014 and were second in 2015 — and he has waved off big games by tight ends and other over-the-middle receivers as the cost of doing business.

But the cost has been pretty significant at times — e.g., the Super Bowl loss vs. New England — and the Hawks apparently are ready at last to address the short-pass shortcoming.

“We are recognizing how teams were putting their packages together for us,” DC Kris Richard told 710 ESPN in June. “Teams have come in and changed things up for us. … I believe the biggest thing teams were doing was maintaining control of the football. The Patriots were trying to preserve as much time with the ball in their hands.”

To counter the strategy, the Hawks are planning to become more matchup-oriented. One of the big moves involves trying Brandon Browner at safety — a role the Patriots used him in, matched up against tight ends and slot receivers.

“We’re going to play him at safety in base downs, and then in nickel we are going to use him to match up at different spots playing inside,” Carroll told 710 ESPN in May. “So we may be able to develop a really unique role for him.”

Carroll said the Seahawks might lean toward more dime defenses than nickel — meaning six defensive backs. That’s a good sign they are likely to keep 10.

Part of the reason Carroll is willing to make these tweaks this year is that most of his defenders have been together for several years and know enough football now. Earl Thomas and Kam Chancellor were drafted in 2010; Richard Sherman, K.J. Wright and Mike Morgan (UDFA) in 2011; Bobby Wagner, Jeremy Lane and DeShawn Shead (UDFA) in 2012. Browner joined the team in 2011, too, and returned this year after two years away.

Basically, the entire secondary and linebacker corps are homegrown — and most have been with the team for at least four years.

Carroll said coaching legend Bill Walsh used to say, “You really can’t draw on great experience until you are together for five years.”

“There is something to that,” Carroll said. “You watch … the level that Bobby and K.J. are at now and their understanding of the game. It is not just that they know how to play or they know their assignments, but they have so many past experiences that we can draw from. It allows us to communicate on such a high level and so quickly that we are just connected. It does make a difference and hopefully we will be able to bank on that.”

On the radio Wednesday