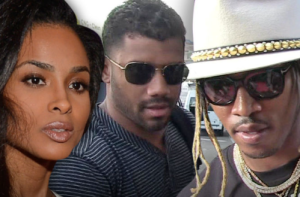 Maybe the Seahawks need a backup quarterback more than we thought. And maybe they and the NFL should take Ciara’s warning seriously.

All of the news about Tarvaris Jackson and Trevone Boykin over the last week brought Seattle’s No. 2 QB spot into the spotlight — and most of us dismissed it as a tertiary concern because the super-savvy Russell Wilson never gets injured on the field.

But, to hear his fiancée tell it, Wilson could be in danger off the field.

As if opposing defensive linemen weren’t enough of a threat to the QB behind Seattle’s subpar offensive line, Ciara says her thug-rapper ex wants to kill the man she reportedly is going to marry tomorrow.

Seahawks fans never had to worry about this kind of thing with Matt Hasselbeck, who lived an under-the-radar life outside his moderate NFL fame. But Wilson has doubled down on his celebrity, choosing to marry a woman who is perhaps even more popular in her own entertainment circles.

This was the risk Wilson took when he decided he wanted to date — and now marry — a singer who was stupid enough to have a kid with a thug.

It was one of the first thoughts that came to mind when we heard Wilson was dating the baby mama of a gangsta rappa. The punk, who calls himself Future (we happily had never heard of him until Ciara came around the Seahawks), has made several threats toward Wilson.

It’s easy to dismiss them. Who in his right mind would put a hit on an NFL superstar? And announce it to the world? Future’s lame name would quickly become oxymoronic if he tried something so outrageous.

But you can never guess what ghetto terrorists like him are going to do. Many of them are too stupid to be concerned about their futures. They act brashly to protect their perceived territory, with no regard for any lives involved. That’s why the threat has to be taken seriously.

If they aren’t already, Wilson, the Seahawks and the NFL’s security folks need to keep an eye on this rapper and his sycophants.

And then the Seahawks need to work on finding a viable backup QB — in case the thug rapper does what no NFL defender has been able to do: Take Wilson off the field.