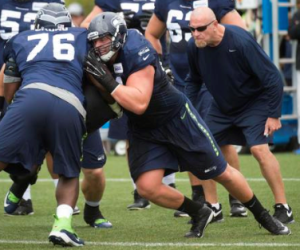 If Seahawks past and present have anything to say about it, Tom Cable will coach an NFL team again.

According to the Huffington Post, Cable “absolutely” wants to be a coach again, and everyone from Pete Carroll to Dan Quinn to Marshawn Lynch is lobbying on his behalf.

The first part of the Post piece is a rehash of stuff Cable has said in several offseason interviews: a progress report on Seattle’s mostly brand-new offensive line and a reiteration that the coaches are very focused on trying to pick up where they left off last season.

The interesting stuff comes at the end, where Cable says he wants to be a coach again — but only in the right circumstance, which he has observed firsthand on a Super Bowl team created by John Schneider, Carroll, Cable and others.

“I hear guys say all the time, ‘There’s only 32 head coaching jobs — just get one,’” Cable said. “I don’t know if that’s true. I think it’s important that you get the right match. The relationships between the head coach, the GM and the owner now are so important. … Seattle has been pretty special.”

Carroll said Cable “has all of the makings of being a terrific head coach, and I think that’s in his future.”

Quinn, who parlayed two Super Bowl seasons as the Seahawks’ defensive coordinator into a lead role with the Falcons, has talked up Cable to two teams.

Lynch said Cable is “innovative. He understands players, he’s been a mentor to me, and he’s going to be one hell of a head coach.”

That remains to be seen, of course.

Cable already has had one shot, tallying a 17-27 record with the Raiders in 2008-10. Of course, that franchise has been one of the very worst in the league for over a decade, so failing there is no shame.

The 51-year-old has matured from his days of beating up assistant coaches (he told the Post about the positive impact of his family) and has learned a lot under Carroll, but another coaching gig seems a long shot.

Despite two Super Bowl appearances as Seattle’s assistant head coach, the only reported sniffs he has gotten have been from the Lions (end of 2013) and Jets (end of 2014).

Even a team record-setting 2015 season did not bring any interest. His only hope might be getting the revamped line to keep the offense performing the way it did before the playoffs last season so the Seahawks can reach the Super Bowl again.

Maybe then he will get one last chance to run one of the league’s 32 teams.

One thought on “Cable ‘absolutely’ wants to be a coach again”