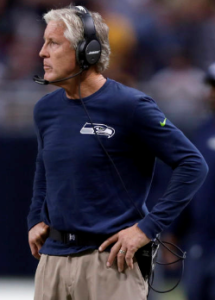 As the Seattle Seahawks seemingly sleepwalk through this season, with little sign of their previous hunger to win and killer instinct, it is fair to wonder whether the players have tuned out Pete Carroll and whether he can regain their ear before the season really does spin out of control.

Back-to-back Super Bowls, contract concerns and Carroll’s game-losing call in the last title game all could be culprits in the Seahawks’ late meltdowns that have resulted in a 2-4 record.

Carroll surely lost some players with his ill-fated decision to throw the ball rather than run it with Super Bowl XLIX on the line, and it is clear he has not gained back the confidence of all of them.

On top of that, he has a new defensive coordinator and the Legion of Boom has not been itself.

Kris Richard, the DC, took the blame for the communication breakdown that resulted in Carolina tight end Greg Olsen being wide open to win the game Sunday.

“I stand up and I absolutely accept full responsibility for what happened at the end,” Richard said. “It will not continue. We must get better and we are examining each and every single possible thing we can do to fix it, again, starting with me.”

On the field, though, it starts with the Legion. And, as Earl Thomas said, “We’re not being ourselves. I think we’re distracted.”