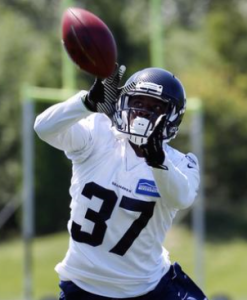 The secondary is one of the Seahawks’ most competitive spots this summer, but most of the competition has been missing the past week or so thanks to a
legion of boo-boos.

In Kansas City, the Hawks were without seven of their 11 cornerbacks and had only four safeties available. It was so bad that DeShawn Shead moved from safety to start at corner and fifth-round rookie Tye Smith played almost the entire game.

Shead and Smith both took advantage of their chances, drawing praise from coach Pete Carroll after playing tight coverage throughout the game.

Now it’s time for the rest of the corners to get their chances when the Seahawks play the Chargers in San Diego on Saturday night. Richard Sherman, Will Blackmon and Tharold Simon all are expected to play — with Blackmon needing to nail down the nickel job and Simon needing to prove he should be on the team (forget about starting).

Meanwhile, safety Earl Thomas apparently is on track to be ready for the opener in St. Louis on Sept. 13.

“Earl got a lot of work this week. He’s getting ready to be in shape to play for the opener,” Carroll said. “His timing is getting down, his calls, you can see him fitting in, his intensity that he brings is starting to show up. That’s important.”

The Seahawks have to cut the roster from 90 to 75 by Tuesday and then to 53 four days later.

Here’s a look at the defense heading into the third preseason game:

The top six are set, and Marsh is a coaches’ favorite, so that means the rest are working for probably two spots.

Smith had a solid first game, but his rib injury could hurt his chance if he is out for long. Scruggs, Dobbs and the rest are battling alongside him for the final two spots.

McGill had a good game against Denver, but he didn’t stand out as much in Kansas City. Because they have enough inside rushers — Bennett, Hill, Clark — it seems like the Hawks would prefer more of a run stopper for one of those final two spots.

It’s really too bad the Hawks had to cut Tony McDaniel, who would have made this a deep, deep line both on the pass rush and the run defense. As it stands, the run defense could be in trouble if Mebane or Rubin gets hurt. It wouldn’t be a surprise if John Schneider ended up bringing in a bigger guy cut from another team.

This unit was spectacular against the Chiefs, with Wagner getting the first pick-6 of his football life and Wright and Pierre-Louis making plays all over the field.

Irvin recovered quickly from a concussion and is expected to play in San Diego, where he made a boneheaded play (shoving Philip Rivers out of bounds) that helped cost the Hawks the game in Week 2 last season.

The top six look locked in, and it just comes down to whether one of the others — Pinkins? — stands out on special teams more than a defensive back.

Smith has played well in both games so far and should have the edge on Simon, Burley, Seisay and the rest for one of the final corner spots behind Sherman, Williams and Blackmon.

Simon, who admitted he wasn’t prepared for Super Bowl XLIX, thinks he has a chance to beat Williams for a starting spot. Clearly, that is a pipe dream for a guy who can’t stay healthy and who got burned badly throughout the playoffs last season.

Seisay, acquired in a trade with Detroit, was off to a great start before suffering a groin injury and seems to be on the wrong side of the bubble. Carroll talked about him in the past tense: “I liked him. I really liked him. He looked the part physically, he ran well, made some plays early on. Just a shame for him that he hasn’t had a chance to show. He was making very, very good progress. I don’t know if we’ll get to play him this week or not, but next week will be a big week for him, of course.”

If we were making the pick, we would keep Seisay over Simon — hands down. But the Hawks surely will favor keeping the former fifth-round pick over the guy they traded a sixth for, especially if the sixth was conditional on Seisay making the team.

At safety, Bailey and Martin continue to impress Carroll.

“Dion continues to show he’s a really good football player,” the coach said this week. “He can tackle in the open field and hit you. He’s got great instincts; he’s always been an instinctive football player, another guy we watched grow up. He’s always been a playmaker, and it’s carrying over. So I’m really fired up about what he’s shown; he’s had a great camp with us.

“Buck Martin is a good football player. He just looks smooth at everything we ask him to do; he looks good at it. So we’re going to keep giving him a great look and see where he fits. He’s playing free safety and strong safety, and he’s done a nice job on special teams as well.”

Carroll loves to keep nine or 10 defensive backs, and the depth here seems to indicate he will go with 10 this year. The obvious locks are Sherman, Thomas and Williams. The near locks are Blackmon, Shead and Bailey.

With Lane and Chancellor still out, that leaves six top candidates for the final four spots: Smith, Martin, Terrell, Simon,
Burley and Seisay.