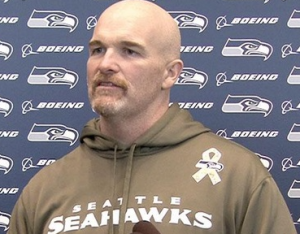 The Seattle defense apparently will have some added incentive to put forth a stellar Super Bowl performance on Feb. 1: Sending coordinator Dan Quinn to Atlanta with a win.

The Falcons interviewed Quinn for a second time Monday in what reportedly was more of a formality as they already have decided to hire him. They reportedly had hoped to bring him out to Atlanta this week to announce the hiring, but his Seattle defense shut down Aaron Rodgers and the Packers for most of the game Sunday, giving Russell Wilson and Jermaine Kearse a chance to redeem themselves and send the Hawks back to the Super Bowl.

The Falcons reportedly already are securing Quinn’s staff — starting with offensive coordinator Kyle Shanahan — and likely will name him their coach the day after the Super Bowl.

Seahawks coach Pete Carroll knows all of this, of course, and is not concerned a bit about losing Quinn or about it being a distraction leading up to the Super Bowl.

“It comes along with good fortune when guys get good opportunities like that,” Carroll said. “I am pretty wide open and flexible in hoping that it works out, and that it won’t be a distraction. There will be questions and stuff like that, but we have such a big mission that we are on and Dan wants nothing more than doing exactly right for what we have to do these next couple of days and the next week. He has no intention other than that, and he is dead solid on that, and that’s what we will get.”

As for replacing Quinn when the time comes, it seems likely that Carroll will simply promote from his own staff — with the top options being secondary coaches Kris Richard and Rocky Seto.

Some have speculated that the Seahawks would be interested in San Francisco defensive coordinator Vic Fangio or secondary coach Ed Donatell — a former NFL DC. But both are expected to be hired by the Washington Redskins this week.

When Gus Bradley left in 2013 to become coach of the Jacksonville Jaguars, the Hawks already had a bead on Quinn, who had coached in Seattle in 2009 and 2010 and had just finished his second year as the DC at Florida.

The Hawks don’t have that DC-in-waiting tucked away in the college ranks this year, so they seem likely to preserve continuity with Richard or Seto — especially with most of Seattle’s key defenders signed for at least the next three seasons.

Richard would seem a fine candidate. He played for Carroll at USC and then was drafted by Mike Holmgren’s Seahawks in 2002 and played for the team for three years. He then joined Carroll’s staff in 2010 when Carroll was hired by the Seahawks.

Seto coached under Carroll at USC for six years and came to Seattle with him.

Under the tutelage of Carroll, Richard and Seto, the secondary has been the strength of the Seahawks.

And they have a ready replacement for Richard or Seto in Marquand Manuel, who started in Seattle’s first Super Bowl in the 2005 season. He has been on Carroll’s staff for three years.