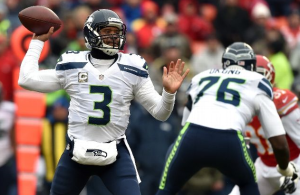 Russell Wilson has been scuffling along for weeks, fighting a passing slump (we can only hope it is passing) that has been worse than
anything since early in his rookie season.

It’s almost as if he has been enduring the so-called sophomore slump in his junior season.

He played better in Kansas City, seeming to find a little rhythm with his receivers, but he still was unable to rally the Hawks — the third time in Seattle’s four losses he has not been able to win it at the end.

You would think the third-year quarterback would be past that kind of a skid, especially considering all of the trials and tribulations he overcame last season, when he played behind a battered and leaky offensive line against some of the league’s best defenses and still led the Hawks to a Super Bowl title.

He started strong this season, throwing eight touchdown passes and just one interception in Seattle’s 3-1 start. But then his offensive line started to crumble, Percy Harvin refused to play and then was traded, and Wilson fell into his prolonged slump.

It all started in a home loss vs. Dallas, which was the first game center Max Unger missed and the game Harvin reportedly refused to return to the field in the fourth quarter. Wilson completed 14 of 28 passes for 126 yards and an interception in his worst game since the Seahawks’ home loss to Arizona last season.

Harvin was traded after that Dallas game, and Wilson’s slump continued in St. Louis as Unger remained out. Wilson hit just 9 of 17 passes in the first half and the Seahawks were 0 for 2 in the red zone as they fell into a 21-6 hole.

Wilson turned it on in the second half, though, completing 14 of 19 passes, running for 101 yards and a score and throwing two TD passes. He became the first player in NFL history to throw for 300 and run for 100 in a game, even as the Hawks’ special teams blew the game.

It seemed as if Wilson’s mini-slump had ended.

But then he put up subpar (or worse) numbers in the Seahawks’ three-game winning streak as the Hawks lost left tackle Russell Okung for a game and left guard James Carpenter for another while also being knocked down to third center Patrick Lewis.

Wilson completed just 47 of 84 passes (56 percent), with one TD pass and three picks in wins over Carolina, Oakland and the New York Giants.

Before the Kansas City game, Wilson tried to find an explanation for his struggles.

“I think my accuracy has been a little off for whatever reason,” he said, adding that he has lost his poise and rushed throws at times.

Even though the passing game was scuffling, the running game was working, and Wilson had run for 173 yards and a TD on 28 attempts in the three wins.

“I feel like I’ve found ways to win these past couple of weeks,” he said, “and you have to remember we’ve had a lot of guys out and all that.”

That’s as close as Wilson will come to declaring that the injury bug really has affected the continuity of the offense.

“You’re going to have your ups and downs,” he added, “but the key is finding your way back into that groove and staying in that groove, and that’s what I believe is going to happen.”

So did he rediscover his groove in Kansas City?

Well, he had his best game since that loss in St. Louis, hitting 20 of 32 passes for 178 yards and two touchdowns. But he couldn’t rally the Hawks in the fourth quarter and Seattle ended up 0-2 in Missouri this season.

“I think it was a resourceful game like we’ve seen Russell play,” coach Pete Carroll said. “He made the most of his opportunities to get out of the pocket and picked up really valuable yardage.

“It could always be better. We could always take more advantages of shots. We had guys open that we didn’t quite get the ball to that we need to; but, all in all, we were in position to win the football game, and we just need to catch the ball and throw the ball and get that done.”

With Unger out for a month or so with injuries to his ankle and knee, the Hawks have brought back Lemuel Jeanpierre, who was released on an injury settlement in September. While Wilson has talked up the third-stringer Lewis in his usual repetitively positive fashion, he has to feel a little more confident with Unger’s former backup coming back. Carpenter is expected back this week as well, which means Wilson might start to feel a bit more comfortable.

The Seahawks have the toughest remaining schedule in the league, starting with the Arizona Cardinals (9-1) this week. But Wilson should be able to throw on Arizona, which gives up 263 passing yards per game. San Francisco, the league’s No. 4 defense, might be a different story. But Philadelphia and St. Louis give up a lot of passing yards, too.

If the Hawks are going to make the playoffs, they probably need to win five games, and they have to hope Wilson has shaken the midseason slump and is ready to finish strong.

As he said last week, “I’m not going to doubt myself. I’ve played a lot of great football at times. I believe every time I get the ball in my hands, I’m going to make something happen. That’s never going to change. My confidence never wavers.

“There have been a lot of opportunities that we could have capitalized on and we haven’t,” he said. “I think some of that’s on me, and I look forward to those moments again, whenever they come back up. I believe that those game-altering plays I’m going to make.”