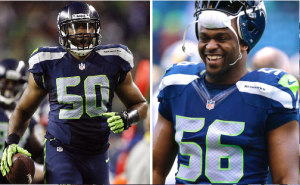 The week leading up to the start of the NFL season is always prime time for contract extensions, and this year certainly has seen its share.

It’s no surprise that the Seahawks also appear to be in on the action, reportedly exploring extensions for defensive end Cliff Avril and linebacker K.J. Wright.

Those are the next two logical candidates on the Seahawks’ keeper list. As we wrote back in April, the Hawks can afford them if they are willing to be reasonable.

But Avril probably is hoping to hit double-digit sacks, win another Super Bowl and get upwards of $10 million a year, just as Galette reportedly received from the Saints ($41.5 million over four years). If so, the Hawks will simply let Avril become a free agent next offseason.

The Hawks might not be willing to pay Wright what he wants either. The guess is they might not want to pay him more than about $3 million a year, and he might want more than $4 million.

Granted, none of those linebackers were acquired by Schneider, and he, Pete Carroll and Ken Norton have since built a pretty solid LB corps, so the philosophy might change a bit.

Wright and Malcolm Smith are both scheduled to become free agents next offseason, and Bruce Irvin, Bobby Wagner and Mike Morgan are up after 2015. That’s a lot of linebacker decisions to make in the next year or so.

Of course, those all take a backseat to Russell Wilson’s expected extension next offseason.

The new deals for Dalton and Smith seem to confirm the general thought that Wilson will be looking at $20 million per year and perhaps $60 million guaranteed.

The Washington Post even makes the case for Russell Wilson becoming the highest-paid player in the NFL next year.

Dalton received a six-year deal worth between $96 million and $115 million, and Smith got a four-year deal worth $68 million. Wilson’s deal figures to trump both of those. And it certainly will be better than the fool’s gold contract Colin Kaepernick got from the 49ers.