After the 2019 season ended, Pete Carroll said he wanted to keep his offensive line together.

“It is important,’’ Carroll said. “I hope we can keep our guys connected. I don’t want to see a big change there.’’

Well, that plan obviously changed: The Seahawks will have three, perhaps four, new starters in 2020. Only three other teams in the NFL apparently will undergo that much change up front. It’s a tough year to do that, too — with a pandemic impacting preparation time.

The Hawks have not had a steady line at any point under Carroll, usually trotting out around six starting combinations per season. Last year the line was so banged up it had eight starting combinations, if you count the playoff games, and a few other in-game changes as well. 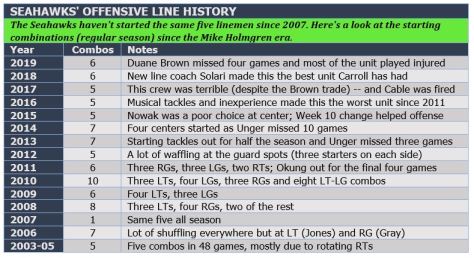 In March, the Seahawks signed three veteran linemen. And then they drafted a new right guard. And then they cut Justin Britt and D.J. Fluker, so they now are replacing Britt with B.J. Finney, Fluker with rookie Damien Lewis, Germain Ifedi with Brandon Shell and George Fant with Cedric Ogbuehi.

That leaves Jamarco Jones, a fifth-rounder from 2018, as a backup. But where? He played well at the guard spots in 2019 and struggled in one start for Duane Brown at left tackle. Will he get more time at left tackle behind Brown, who missed four games in 2019? Will Jones push Ogbuehi to be the swing tackle?

Beyond Jones, the backup spots come down to Joey Hunt vs. Ethan Pocic at center, and Chance Warmack vs. Jordan Simmons at guard. Seattle might keep as many as 10 linemen because the new CBA allows an extra lineman (and one other player at any position) to be active on game day. So they will have at least eight up every week.

It’s a tough year, during a pandemic, to be piecing together a new line — something Schneider admitted.

Schneider said they are doing what they can on Zoom now — the virtual offseason. Then they will meet for the first time in person in July or whenever camps can start. And they will have to jell quickly.

“It’s always a challenge,” Schneider said. “This year it’s going to be a little bit more of a challenge.”

Since Russell Wilson became quarterback in 2012, the Seahawks have never had their main quintet start more than eight games in a season. And the year (2018) they got eight starts out of a starting five (Brown, J.R. Sweezy, Britt, Fluker, Ifedi) was the best year by a line in the Carroll era.

They carried over four starters from 2018 to 2019, the most since 2012-13. But the ACL injury to Britt at midseason and Brown’s arm injury messed with the left side of the line. Their most dependable guys healthwise were Ifedi and Fluker, so it’s ironic that both are gone; the team obviously feels it is upgrading with Shell and Lewis. The Hawks just decided to get cheaper (by about $5 million) at center with Finney.

The Hawks will hope Finney, Lewis and Shell stay on the field and that Jones or Ogbuehi will be capable of spelling the 35-year-old Brown if/when he gets injured.

This line actually could hold together for a couple of years, since Brown, Finney and Shell are all signed through 2021 and Haynes and Lewis are on rookie deals through 2022 and 2023. But the Hawks have to find tackle options beyond 2021, and they know they will need their backups in 2020 — because they always do.

3 thoughts on “Offensive line shakeup comes at a bad time”