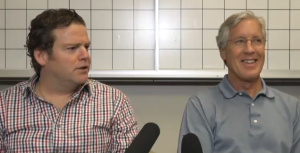 Pete Carroll and John Schneider made the radio rounds last week, with both talking to 710 ESPN and Schneider doing a stint with KJR.

Carroll broke down in a little more detail why and how the offense is changing, and he explained the trait of humility that he and Schneider have stressed this offseason.

Schneider revealed a little more about why the Seahawks shrank their draft board, his continuing dismay over offensive line prospects and a few other interesting tidbits about this draft.

For those not paying close attention, Carroll has focused on two things this offseason: (1) Dumping players who were not with the program anymore and (2) refreshing the running game in hopes of rediscovering offensive balance.

When the Seahawks drafted Shaquem Griffin, Carroll told the player on the phone to “stay humble,” and the coach and GM both referred to Rashaad Penny as humble, too. It is obvious this was a theme they were looking for this offseason as they shed a couple of guys who maybe weren’t as humble as they preferred anymore.

Carroll told Brock & Salk, “We always talk about humility, but you’ve seen some examples over the years where we haven’t done a great job of being humble.”

That’s a clear reference to Richard Sherman and Michael Bennett, guys the Hawks dumped this year because Carroll was done with their antics. After they were gone, both referenced Carroll’s message having turned stale for them.

Carroll said keeping the drive alive is a two-way street, not just the coach’s responsibility.

“The freshness can come from both directions, or ‘See ya later.’ … It was time for these guys to move on. Obviously. You could hear it in them.”

Carroll said there is a new energy in Renton. “It feels like it felt four or five years ago. … There’s a great enthusiasm. There’s a great juice about it. The opportunity for all of these guys is really clear.”

Part of the energy comes from the new coaches. “I think we needed an infusion of new,” Carroll said. “(But) it isn’t philosophically changing.”

He hired Brian Schottenheimer because he wanted an offensive coordinator “to take the best of what we’ve done and add to it and tweak. I didn’t want wholesale change. Brian had the background to understand all of that and also bring the newness and freshness we needed.”

Carroll finally figured out his two-headed coordinator system was a bust — he said he wanted to streamline play design and calls through one person, Schottenheimer.

Asked if he would have made these changes if Blair Walsh had made the field goals that would have given the Seahawks a couple more wins last season, Carroll said, “It isn’t about the 11-5. It’s about how it happens.”

He said he had been frustrated for a couple of years because “we can’t see us in action the way we want to see us.”

He said 2017 was “disappointing. We had a really good club to put together and we just couldn’t keep it all healthy. But, most of all, we lost our balance in the darn running game again. It happened two years in a row. That’s why we spent so much focus to get it back in there.”

But he clarified his goal to improve the running game is not just so the Hawks will simply run and run some more.

“It isn’t like three yards and a cloud of dust. It ain’t Ground Chuck,” he said, referencing the nickname for Chuck Knox’s approach with the Rams, Bills and Seahawks. “It’s about balance, so you can formulate your whole approach and you make your opponents have to deal with all aspects of this game.”

Carroll hinted that Tom Cable’s scheme did not fit the line talent the Seahawks have put together the past two years. He said, “We needed to shift gears a bit to match up with the guys we have here.”

He said Mike Solari runs a diverse blocking scheme that will still include zone plays. “But Mike is a really good angle blocking background guy. He brings us the power, he brings us some plays where we get the ball on the edge.”

Carroll said he looks forward to having Duane Brown for a full season (Schneider wants to extend Brown, too), and the coach expects Justin Britt, Germain Ifedi and Ethan Pocic (who is 18-20 pounds heavier) to improve. He called 340-pound guard D.J. Fluker “a monster of a guy.”

The Hawks drafted Rashaad Penny in the first round because he was the best back in the draft at making people miss and gaining yards after contact behind the line.

“The running back’s ability to make things happen when things aren’t quite right, it’s an art. Some guys have it and some guys don’t,” Carroll said. “He’s silky the way he runs…. He just rolls right through tackles. … He’s strong as hell. He’s really healthy, he’s really fast, he’s really humble. And he can catch the football.”

Schneider reiterated the Hawks would have drafted Penny at 18 overall if they had not found a way to trade down to 27 — and they were still sweating it waiting for Penny at 27.

Asked about the battle between Penny and Chris Carson, Schneider told KJR, “Every time Chris Carson steps out on the field, he looks like one of the best players out there. … I think that’s something that will take care of itself once we get into camp and the pads start cracking.”

The Seahawks were ripped by some for ignoring the offensive line until the fifth round, when they added Jamarco Jones (Schneider said they were surprised Jones was still there).

Schneider said this O-line “class was very average. We haven’t seen a very good class in several years now. It’s a pretty big concern for the NFL as a whole.

“These guys are all playing spread (offenses in college). There’s only seven teams maybe that are playing big-time football that you can project … what type of pro (their players) will be. That’s diminished significantly since 2008-09.”

Schneider lamented the loss of NFL Europe for the development of linemen and backup quarterbacks. He said the NFL hopes the new minor leagues — the renewed XFL and the Alliance of American Football — can fill that void as developmental venues.

Schneider further explained the Seahawks’ return to a smaller board. He told 710 ESPN the horrible 2013 draft, which is considered to be one of the NFL’s worst in 40 years, was the impetus for beefing up the draft board in 2014-16. Seattle basically was trying to compensate for what it knew — apparently even one year later — was a bad 2013 class (Luke Willson is the only player who played out his four-year contract with Seattle).

“Every year, you’re trying to compensate for lack of depth in a certain class,” Schneider said. “We decided to cut the numbers back again and pick players who have specific qualities we’re looking for.” Like that humility.

Schneider said the scouting staff goes through the board four times, trimming it down, before the coaches come in the weekend before the draft to see where it sits. They then spend the next five days working through any differences of opinion.

Carroll said they thought Rasheem Green would go higher than where they took him in the third round (79th overall). He slipped due to a knee injury three years ago, but Carroll said he has played “thousands of snaps” since the injury and it is not a concern.

Schneider said Tre Flowers, a fifth-round conversion project, did a private workout as a corner with one of Seattle’s area scouts. Schneider said they tried to keep it hush-hush because people know the Seahawks like big corners (the 6-3 Flowers has an 83-inch wingspan).

Schneider said the Seahawks were contemplating trading the fifth-round pick they used on Shaquem Griffin, so the excitement of the pick didn’t hit him until he was on the phone with Griffin. Carroll said, “He’s everything we’ve always talked about”: Grit, toughness, chip on his shoulder. “He can be on my team anytime. Let’s go.”