In the next week or two, we’re going to find out a whole lot (OK, at least a little) about the Seahawks’ offseason plans.

Today is the first day of the two-week “tag” window, which may or may not be pertinent to the Seahawks.

A lot of people expect John Schneider to franchise Sheldon Richardson. We think the transition tag would be better (unless Schneider plans to trade Sheldon). And it’s still most likely that Schneider won’t use a tag at all. 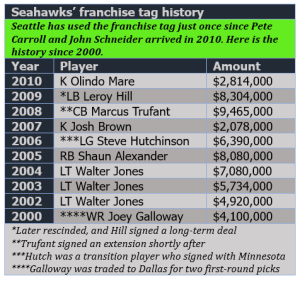 Schneider and Matt Thomas will probably talk contract with Sheldon’s agent all the way to the March 6 deadline. They likely will meet at the Combine in Indianapolis next week — unless it is clear they won’t be able to reach a long-term agreement.

Also in Indy, we’ll finally hear Schneider and Pete Carroll talk about their huge coaching shakeup and their plans for the offseason (as much as they will tell anyway).

By March 6, the tag deadline, we will know their intent with Richardson and they probably will have released Jeremy Lane and Cliff Avril to clear cap space for whatever moves they intend.

One thought on “To tag or not to tag? We’ll soon find out”