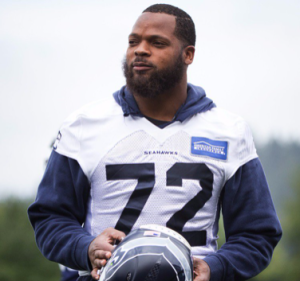 Plenty of people wonder why
Michael Bennett has picked up where Colin Kaepernick left off in sitting out the national anthem.

If you are one of those folks, you obviously are among those Bennett wants to take out of their “comfort zone” and to make evaluate whether the “Star-Spangled Banner” really stands for what you think it means. He wants you to rethink your allegiance to a nation that still condones the oppression of minorities, a country now run by an obvious racist.

If Bennett’s sit-down offends you, maybe you forgot the anthem is a war hymn written by a slave owner during America’s slavery era. The non-inclusive salute to the “land of the free and the home of the brave” stuck as America’s song, passed down from generation to generation.

It made its first sports appearance at the 1918 World Series, where it served as a random uniting moment as World War I was winding down. Of course, it united only white people. Baseball did not begin to integrate until Jackie Robinson made his major-league debut in 1947, and segregation was rampant throughout America until the late 1960s — 100 years after the Emancipation Proclamation. This was far from the “land of the free” for everyone.

So, yeah, Bennett has every reason not to celebrate the song. Just like Kaepernick did. Just like everyone does.

The anthem reminds us of the Pledge of Allegiance — a preposterous piece of propaganda schoolkids are forced to recite every morning. We stopped saying the words by high school, when we figured out that pledging blind obedience “to the republic” was ridiculous and that the “one nation” was far from “indivisible” and didn’t offer “liberty and justice for all.” (That thought has never been truer than under this despotic administration.)

Nationalism is poisonous in all forms. It is just another way to make it us vs. them, like a holier-than-thou religion. But people can’t resist it, because they want to belong, to fit in, to be accepted. Many are scared of people who aren’t in their club — their nation, their race, their religion, their small town, etc. Cowards like that want to conquer, convert and oppress the people they fear.

That’s why “United States” is such a misnomer. The people in this country have never been united — as we have seen in every election and as we were reminded once again in Charlottesville last weekend.

Good Americans have worked for decades to get past the bigotry that has always divided this nation, but it’s obvious there will always be racists — the worst being power-tripping rednecks who end up as murderous cops or the KKK puppet president who wants to make America white again.

That’s what Bennett is protesting — these white-trash supremacists who think America is only for them. He’s not going to stand for an anthem that represents that kind of ignorant nation.

Most of us have always stood in respect for the anthem and the flag, which represent the country’s best value: freedom. But that value clearly has not always applied to everyone equally.

By sitting down, Bennett is standing up for all of the people the song originally did not — and still does not — represent.

And he’s giving everyone a great opportunity to reconsider just what it means to be an American.