As they face the Falcons, the Seahawks will be looking to reverse a bad trend: poor performances off long layoffs. 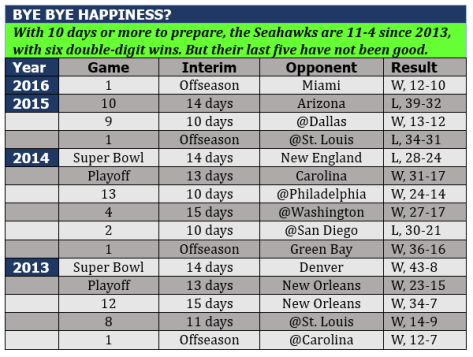 But they finished 2014 poorly, losing Super Bowl XLIX at the end after a 14-day prep period. And they haven’t done well on long layoffs since then, losing 34-31 at St. Louis in the 2015 opener, barely beating Dallas in an ugly 13-12 contest before their bye and then dropping a 39-32 home decision to Arizona after their bye.

Defense was a huge culprit in both of those 2015 losses, which were the reason they failed to win the NFC West. Had they won those division games, they would have ended up 12-4 with a first-round bye. As we all know, playoff byes were good to Seattle in 2013 and 2014, when they beat New Orleans and Carolina, moved on to the NFC title game and then the Super Bowl.

But the Hawks lost those two division games in 2015 and paid the consequences with two miserable road playoff games.

So, they entered this season with three losses in their last four off long layoffs — and barely squeaked past Miami in the opener, due mainly to a new offensive line that was outclassed.

Now they are getting ready to face the No. 1 offense in the league — and the question is: Have they finally gotten back on the post-bye winning track?