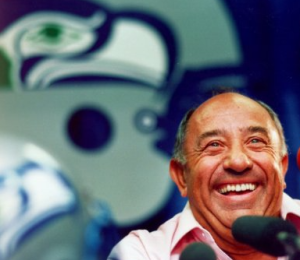 It’s only appropriate that the Seahawks are going to be the first team in 22 years to play the Rams in Los Angeles.

L.A. fans are excited – or were before Monday’s debacle — about the return of the Rams, and plenty of people are making a big deal of Pete Carroll’s return to the site of his USC glory.

But this also marks a pretty major anniversary for the Seahawks, who actually were the last franchise to reside in Los Angeles – if only for a couple of unauthorized months 20 years ago.

As you may or may not recall, Ken Behring tried to move the Hawks to L.A. in 1996, just a year after the Rams and Raiders left. And it was that move that basically led to Paul Allen buying the team – and leading it to three Super Bowls and counting.

Here’s the Seahawks’ L.A. story from my book, “The Good, the Bad, & the Ugly: Seattle Seahawks”:

When Ken Behring bought the Seahawks in 1988, he said he had no intention of moving them to his home state of California.

“You sure would not take a team out of a place where they sell out the stadium every week,” he told reporters then. “The fans would kill you, and I wouldn’t blame them.”

In another interview, he said, “I think Seattle is the greatest football city in the country. I would not even consider buying (the Seahawks) if for some reason they had to be moved.”

But there was always the tingling feeling on the back of the necks of many fans that, if Behring could find a reason, he would indeed try to take the Seahawks south.

And, after taking them south in the standings for eight years, Behring finally confirmed fans’ fears in February 1996 when he announced he was moving the franchise to Los Angeles, which had just lost the Rams and Raiders the previous year.

Behring thought he had his handy reason, too, after a ceiling tile had fallen in the Kingdome in 1994 and forced the Seahawks to play their preseason games at Husky Stadium. Behring claimed King County had failed to maintain the Kingdome as a “first-class facility,” and he cited an alleged lack of structural integrity in the event of an earthquake. (That reasoning didn’t sit well with anyone: He wanted to move the team from Seattle to Los Angles to escape earthquakes?)

He announced the decision on Feb. 2 and a few days later had his trucks hauling gear from the Seahawks’ headquarters in Kirkland down to Anaheim, Calif., where he planned to set up shop and conduct offseason workouts.

“I’m committed to Los Angeles,” he told The Los Angeles Times. “I’m a Californian, and this is where I want to be.”

King County leaders tried to stop the team from moving with a temporary restraining order, but they were powerless because the lease with the Kingdome did not prohibit the Seahawks from training out of state.

“There is very serious concern on my part and among the (league) ownership on the Seattle situation in terms of the Seahawks just picking up and seeming to relocate their practice facility to Southern California,” Tagliabue told reporters. “The Seahawks are the NFL team in the Pacific Northwest, and there is an expectation among the ownership and on my part that they represent the league in every way possible in the Pacific Northwest.”

Tagliabue had already seen two franchises move in the past year, and the owners had just approved Art Modell’s decision to move his franchise from Cleveland to Baltimore. After the Rams and Raiders had vacated Los Angeles the previous year, the owners – Behring included – had signed a resolution giving the league control of the L.A. market. So Tagliabue was unhappy with Behring’s attempted end-around.

But Behring was still intent on keeping the team in California. The Seahawks began offseason workouts March 18, with 32 players reporting to the old school where the Rams used to be based.

Just three days after the Seahawks began workouts, Tagliabue threatened to fine Behring $500,000 if he did not move the team’s offseason camp back to Kirkland. With negotiations under way to sell the team, Behring had the team back in Washington by the end of March.

It was the first good thing to happen to Seattle fans under Behring’s ownership since the team had won the division title in his first year as owner. The next good thing came a month later, when Behring and Allen agreed on an exclusive 14-month purchase option. Allen reportedly paid $18 million for the option and the right to sign off on major franchise decisions over the next year.

But there were still hurdles to keeping the franchise in Seattle. Allen would not buy the team unless voters agreed to pay for a new stadium. And, because Allen owned the NBA’s Portland Trail Blazers, the NFL had to eliminate its prohibition on owners possessing a team in more than one sport. NFL owners abolished the rule at their March 1997 meetings.

Then, on April 25, 1997, the Washington state legislature passed a funding plan for Seahawks Stadium, which called for the public to pay $300 million and Allen to pay $130 million plus any cost overruns. The legislature set a statewide vote for June 17, and the referendum barely passed, 51.1 to 48.9 percent.

With the new stadium on the way, Allen finished his purchase of the Seahawks in June 1997. Behring, who had bought the team for $80 million, sold it for $194 million. And everyone was happy the team was no longer in Behring’s hands or in Los Angeles. It was in Seattle to stay.

For more on Ken Behring and other inside stories on the 1980s and 1990s Seahawks, check out my book with Paul Moyer and Dave Wyman: “Then Zorn Said to Largent.”