Now that we’ve gotten our first look at the Seahawks in a game situation, let’s take an educated look at the position battles.

Trevone Boykin got most of the chances in Kansas City, and — while he struggled with accuracy and some first-game rookie jitters — he took some big steps in those four quarters. Largely because he is a Russell Wilson clone, he seems like the coaches’ favorite — and he did little to make fans think the coaches are wrong. 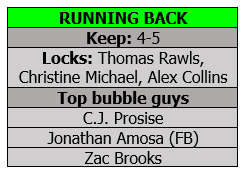 Christine Michael, a question mark after the Hawks drafted three backs, now seems to have secured a spot. With Thomas Rawls out, Michael is the No. 1 back — and he is running like it. Alex Collins has shown enough that he seems like a lock as well. C.J. Prosise has some proving to do to get off the bubble, but his third-round status means the Hawks are going to give him every chance — if he can get healthy. 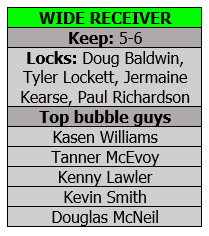 Other than Tanner McEvoy’s late-game heroics, none of the young receivers really stood out in Kansas City. If Kasen Williams can get back in the lineup, he still seems like the favorite for the fifth spot. McEvoy could push for a spot if he shows well on special teams — at 6 feet 6, he certainly offers a unique physique. The Seahawks don’t need more than five receivers, though; they likely will stash a couple of guys on the practice squad in case they need one.

As a third-round pick, Nick Vannett is basically a lock. And he showed pretty well in his first game. Brandon Williams didn’t stand out in the opener, but he is known for his special-teams play, and that might be enough for him to make it. 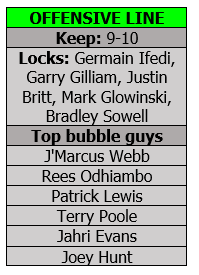 The first five played well in their first game together and should only get better. Of course, it will be interesting to see whether they stay with Bradley Sowell at LT and Garry Gilliam at RT. It’s tough to call J’Marcus Webb a lock when he can’t stay healthy. If he can’t show anything by Game 3, he likely won’t be starting in the season opener, and don’t be surprised if the Hawks let him go — despite his $2.45 million in guaranteed money. He is the least flexible of all of the tackles. Rees Odhiambo, as a third-round pick, should make the team; his learning curve is pretty steep because the coaches clearly want him to be their sixth man. Jahri Evans struggled a bit in the first game, so it will be interesting to see whether he can get it together enough to make it as the swing guard. 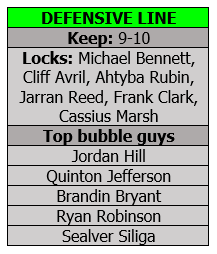 Cassius Marsh has been practicing at linebacker, but he rushed the passer a lot in Kansas City — and did well. He gives the team flexibility at both positions and also makes it tougher for Ryan Robinson to make the team. Meanwhile, DTs Jordan Hill and Sealver Siliga need to get back on the field if they are going to fend off rookies Quinton Jefferson and Brandin Bryant, who both played a lot in the opener. Most assume Hill is going to make it on his laurels, but he will have to prove it at some point this preseason or risk being overtaken. 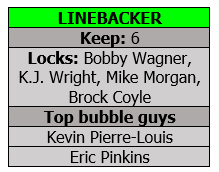 With Marsh able to go both ways, the pressure seems to be on Eric Pinkins to prove he should stick on the roster this time. Mike Morgan is a veteran whose experience and special-teams ability is valued, so it seems very unlikely Pinkins would knock him off the roster. 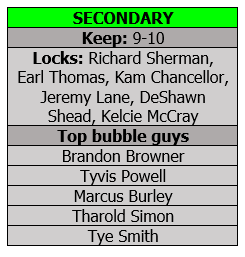 The top six are locked in, and there is a huge competition for the final three or four spots. UDFA Tyvis Powell had a great first game — blocking, tackling, intercepting — and will make it hard to cut him if he keeps it up all preseason. Brandon Browner is learning a specialized role, but there is no guarantee he will make the team. The proof? He played most of the KC game. Tharold Simon had a rough first outing, which didn’t help him in his battle with fellow former fifth-rounder Tye Smith.