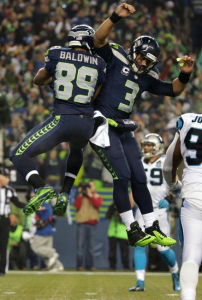 It’s official: The going rate for second-tier No. 1 receivers is indeed upwards of $11 million a year.

As we said the other day, John Schneider is going to have to decide whether to overpay yet another receiver — as he did Sidney Rice and Percy Harvin (after Tim Ruskell overpaid Deion Branch and T.J. Houshmandzadeh). The difference, of course, is that Baldwin is a homegrown Seahawk who has a proven performance history for Seattle.

The Seahawks — a run-based team with a newfound plethora of receivers — surely would prefer to pay Baldwin no more than $8 million a year.

It will be interesting to see whether Schneider is willing to go to $10 million, considering the Seahawks have Tyler Lockett, Jermaine Kearse, Paul Richardson, Jimmy Graham and a bunch of younger players on a team that throws the ball less than almost every team in the NFL.

It seems very likely now that Baldwin will have to prove he is worth $10 million by playing out his contract (which pays him $5.6 million in the final season of a three-year, $13 million deal).

No one should be worried that Baldwin will hold out. He has made that clear in a couple of recent interviews.

On Thursday, Baldwin said he is focused on preparing for next season and “that other stuff will take care of itself.”

On June 3, he told 710 ESPN, “I’m not worried about it. I’m focused on helping my teammates and being out here for OTAs and practicing my tail off so that we can get ready for this season.”

Baldwin did admit that he has talked to his agent about the possibility that he could become a free agent in 2017.

“I’ve obviously thought about it,” he told 710 ESPN. “I’ve built a foundation here in Seattle. I love it here in Seattle. I’ve got my teammates; my teammates are my family. Yeah, I’ve thought about it. It’s not something that you look forward to if you have to do it. It’s just like any other industry, any other thing. If you have to move, there’s difficulties behind it. But that’s part of the business.