This weekend marked the 42nd anniversary of Seattle being awarded an NFL franchise — a monumental event that until recent years had proven much more fruitful off the field than on.

The Seahawks had a horrendous first two decades on the gridiron, making the playoffs just four times. But, in the 19 years since Paul Allen purchased the team, they have been in the postseason 11 times — including 10 times in the last 13 years.

They have reached the Super Bowl three times in the past 11 seasons — a feat matched only by Pittsburgh and New England during that time (coincidentally, the Hawks lost to both in the title game).

Allen’s fortunes off the field have been even better. The team is worth almost 10 times what it was when he bought it from Californicator Ken Behring — $1.87 billion vs. $194 million.

Behring ran the franchise into the ground — while also trying to run to Los Angeles — but he walked away with a 242 percent profit, selling it to Allen in 1997 after buying it from the Nordstroms for $80 million in 1988.

The Nordstroms paid $16 million for the franchise in the 1970s, but they really ended up paying almost none of their own money for it.

As John Nordstrom told KIRO’s Dori Monson a couple of months ago, the league offered the Nordstroms a payment plan to offset the 10 percent rent they had to pay King County. But the new TV deal that paid each NFL team $5.5 million a year essentially took care of the franchise fee.

“That just kind of came out of blue,” Nordstrom said, “which meant that we really didn’t even have to go to the bank and borrow any money.”

Asked if that meant the team was basically free, he said, “Embarrassingly, I have to admit, it was pretty close.”

The Nordstroms decided to sell the team in 1988 because they were weary of player strikes and having their store brand badmouthed.

Unlike Schultz, though, Nordstrom was bailed out — and Allen has taken the franchise to new heights, on the field and off. 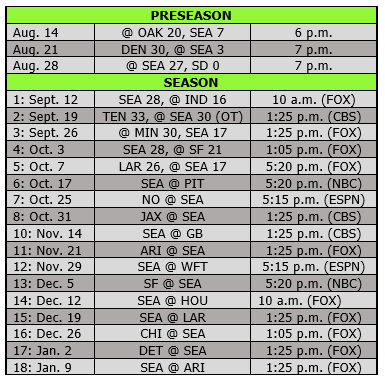