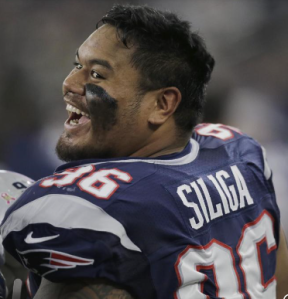 Two down. Three to go. Including the most important.

Now they have three spots left to fill, needing to replace Bruce Irvin and J.R. Sweezy and — most important — come up with a starting-caliber left tackle.

Russell Okung reportedly is reviewing the offers he has on the table from the Seahawks, Lions, Giants and Steelers.

Meanwhile, Kelvin Beachum does not appear to be a match for Seattle. He reportedly headed back home after visiting Jacksonville instead of Seattle. He also has visited the Jets and has interest from Baltimore.

The odds do not seem good that the Seahawks will sign either of those top remaining left tackles, which would take them down the list to 33-year-old Donald Penn (Oakland UFA), injured Will Beatty (Giants cut) and Ryan Harris (Denver UFA). Penn is the only one who has been linked to Seattle so far, but the Seahawks need to come up with a veteran tackle if at all possible.

After the Sowell and Siliga deals, the Seahawks have about $10 million in salary cap space to spend on free agents.

While we wait to see how the Seahawks spend it, let’s take a look at the roster a week into free agency:

QUARTERBACK
The only transaction here was Russell Wilson agreeing to a long-term deal with Ciara via a much-publicized tropical proposal. On the football team, Wilson has no backup. The Seahawks probably would like to have Tarvaris Jackson back; but, if he won’t come back for cheap (he made $1.5 million in 2015), Seattle might move on. Other remaining free agents include Josh Johnson, Matt Moore and T.J. Yates. (We thought they should have drafted UCLA’s Brett Hundley in the fourth round last year.)

RUNNING BACK
The Seahawks are thin behind Thomas Rawls, who is recovering from a broken ankle. Marshawn Lynch retired and Fred Jackson, Christine Michael and Bryce Brown are all free agents. Former CFL rusher Cameron Marshall is the only other tailback on the roster. The team will go cheap behind Rawls, probably with one veteran and one rookie.
Visits/interest: Lance Dunbar

WIDE RECEIVER
Jermaine Kearse’s return means this unit should be the strongest it has been since Wilson arrived in 2012. Doug Baldwin blew up in the second half of 2015, Tyler Lockett was stellar as a rookie and Kearse had his best year, too. Add to that trio Paul Richardson, in his second year back from an ACL injury, and defenses will have their hands full.

TIGHT END
Jimmy Graham’s recovery from a torn patellar tendon will be closely watched all summer. Luke Willson stands ready to fill in, as he has the last two years, and the team also has Cooper Helfet and surely will add a couple to push Helfet for the third spot.

OFFENSIVE LINE
Sowell, who apparently can play all four spots to some degree, appears to be the favorite to replace Bailey as the sixth man. Mark Glowinski is expected to at least battle to replace Sweezy, but the Seahawks need to add a veteran guard; Ted Larsen, who visited last week, is still an option. If the Seahawks fail to add a veteran left tackle, they will have to consider moving Garry Gilliam from the right side. And then the draft will become even more important for the line than it already is.
Visits/interest: Bradley Sowell (signed), Ted Larsen, J’Marcus Webb, Kelvin Beachum, Donald Penn.

DEFENSIVE LINE
The Seahawks reportedly checked into six tackles before signing Siliga, and there’s nothing to say they might not add one more (just two of the others have signed elsewhere). The Seahawks have three guys — Siliga, Jordan Hill and A.J. Francis — set to compete for time next to Ahtyba Rubin in the base defense. The Hawks also brought in old friend Chris Clemons, who likely would be just a pass rusher. Frank Clark has trimmed down into the 250s — a sign that he might be prepping to play some linebacker.
Visits/interest: Sealver Siliga (signed), Chris Clemons, Cam Thomas, Al Woods, Sammie Lee Hill, Cedric Thornton, Brandon Thompson, Paul Soliai.

LINEBACKER
The Seahawks reportedly have talked to former Hawk O’Brien Schofield and also brought in Craig Robertson (Cleveland) as they look to replace Irvin. Mike Morgan also seems a decent bet to return unless some team gives him more than the minimum. Although Kevin Pierre-Louis could be an option to start alongside Bobby Wagner and K.J. Wright, the Seahawks need to add a veteran before the draft.
Visits/interest: O’Brien Schofield, Craig Robertson.

SECONDARY
Jeremy Lane, re-signed for $5.75 million a year, gives the Seahawks peace of mind opposite Richard Sherman. The Seahawks have a deep stable of young corners behind them: DeShawn Shead, Tye Smith, Marcus Burley, Mohammed Seisay, Tharold Simon, George Farmer and Stanley Jean-Baptiste. The big question with this unit: Will Kam Chancellor remain with the team? He is likely to make a fuss about his contract again, and the Seahawks might well choose to trade him. Kelcie McCray stands ready to start opposite Earl Thomas if that happens.

SPECIAL TEAMS
It was no surprise the Seahawks retained Jon Ryan, their rock-steady punter. If Derrick Coleman and Morgan are not re-signed, they will need to be replaced. But, with Ryan, Steven Hauschka, long snapper Clint Gresham and Pro Bowl returner Lockett, Brian Schneider’s special teams are poised to remain among the league’s top units.